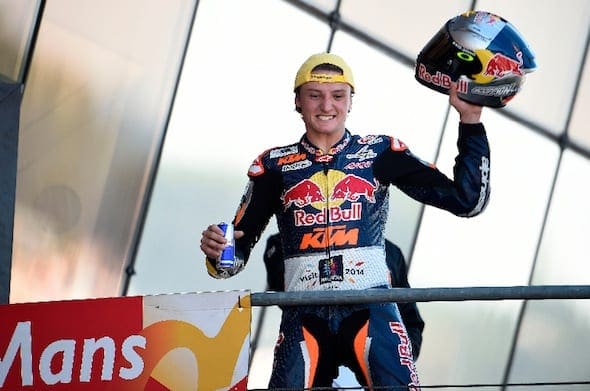 After suffering onboard a hideously slow Honda in Moto3 last season, Jack Miller rightly earned a seat in Ajo’s factory KTM squad. But Honda has seriously upped the NSF’s terminal speed (and exhaust) for 2014, which now makes the KTM visibly more leisurely in a straight line – especially if you’re racing a Honda-powered Efran Vazquez, who weighs as much as a French service station sandwich.

Miller should never have won yesterday’s Moto3 race at Le Mans. He was getting mullered from all angles by a horde of Hondas and, at one time, it looked as though only third was salvageable.

Thankfully, there are loads of corners at Le Mans, and Miller was able to utilise his innate cornering ability (and sheer resolve) to get back to the front and essentially ride round the outside of Vazquez. Some didn’t like his move. The majority of others, justifiably, accept this is Moto3 racing at its compelling best. And besides, Vazquez might be getting too old to compete with this field of prepubescent ruffians. Rubbing certainly is racing.

2014 has already unearthed a future world champion. Jack Miller obviously has the raw speed, grit and required talent, but also boasts the personality MotoGP desperately needs. Let’s hope his slightly loose persona doesn’t get media-polished over the years in order to fit factory teams in the bigger classes.

Anyone who can ‘do the caterpillar’ in a French gravel trap deserves to be world champion in our eyes. Miller is on BT Sport’s ‘MotoGP Tonight’ at 8pm. It’s a live show, so could prove interesting.

On the subject of future stars, keep an eye out for Fabio Quartararo. The young French rider won the CEV Moto3 support race at Le Mans, and is being nurtured by Emilio Alzamora (Marc Marquez’s manager). You’ll see FQ in GPs next year…