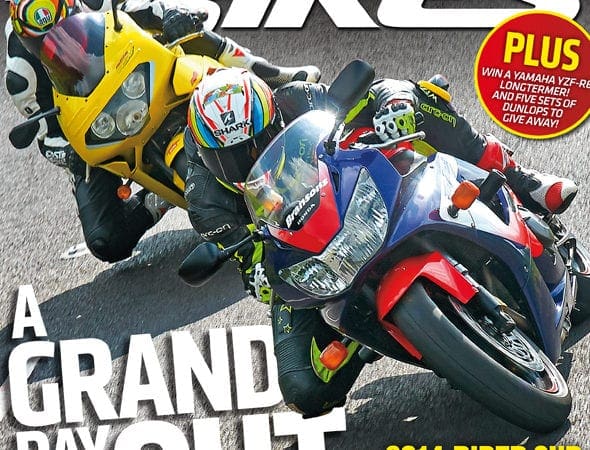 The 290th (July 2014) issue of Fast Bikes should be filtering into the public domain over the next few days, primed to brighten up a horrendous weather forecast for the bank holiday weekend. Subscribers are already rejoicing.

The cover leads with our BIG test: A Grand Day Out. While most of the brand-new sportsbikes are over £10k (even for a 600cc), the used market is there for abusing. For as little as £1,000, you can get your hands on some incredible machinery. We gathered four options, including a GSX-R750 K1, a 2001 FireBlade, an Aprilia RSV Mille and a Kawasaki ZX-9R to prove a 12-year-old bike can match today’s performance.

Upfront is packed with the usual onslaught of fresh news and products, but there’s also an exclusive chance to win a Yamaha R6 longtermer and your very own page in Fast Bikes every month!

Another instalment of the 2014 Rider Cup is a head-to-head with BMW’s groundbreaking new supernaked – the S 1000 R – and the Kawasaki Z1000. And BJ grabbed the chance to pitch a standard Suzuki Gladius against JHS Racing’s TT Supertwin version, which is about to attack Bray Hill on the Isle of Man as we speak.

And there’s the usual feast of regulars, such as Teapot One’s latest around-the-world adventures, the latest legal, technical and riding advice, and lots more! We grabbed ten minutes with Adrian Morton: one of MV Agusta’s lead designers. The used test is Benelli’s Tornado. And this month’s Addiction centre pages feature Robert Dunne’s KTM Super Duke, made even sexier by Jess.

Once again, the racing section is crammed with all the latest news and views, silly-season gossip, and hilarious/insightful columns from Chaz Davies, Steve Parrish and TT-newcomer, Martin Jessopp. As the Isle of Man TT kicks off next week, and hundreds of the world’s best road racers seek their next dose of thrills, we asked the elite lads what their hairiest moment/closest shave was.