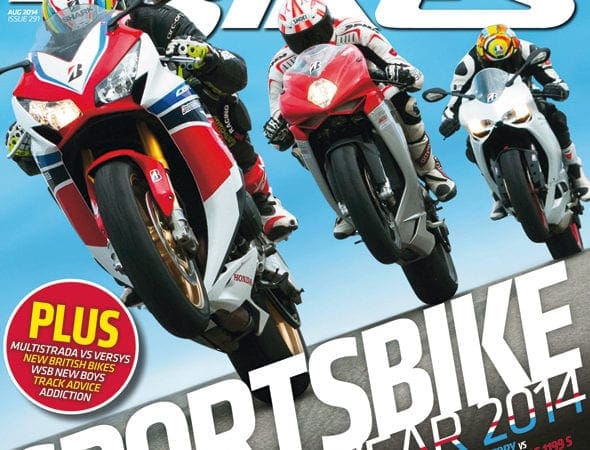 This is it. The biggie. The 2014 Sportsbike of the Year has landed (along with the rest of August’s epic issue) and is ready for public ingestion. Subscribers will be rejoicing this weekend, while digital formats will be available to download on 22/07/14.

This year we’ve gone bigger and better, taking the eight best sportsbikes on this planet to Portimao: simply one of the world’s elite circuits. Last year’s victor, the Aprilia RSV4 Factory, joins the Honda Fireblade SP, MV Agusta F3 800, BMW HP4, Triumph Daytona 675R, Kawasaki ZX-10R, and Ducati’s 1199 and 899 Panigales for two days of unrivalled testing by the Fast Bikes wrecking crew. In the market for a new bike? It’s the only test worth reading. Even if you’re not, it’s worth reading.

And there’s more. We grabbed an exclusive ride on a reader’s very trick Honda Fireblade. John Bennett’s homebuilt creation has to be one of the best reader specials we’ve sampled: the consequence of housing a 1000cc Fireblade engine in a 1996 Blade chassis, with an Aprilia RSV Mille swingarm and Honda RS125 seat unit.

Rootsy went to Bologna (where else?) for the launch of Ducati’s ‘entry-level’ Monster 821, while Al ventured to Top Gear’s test track to try Brammo’s Empulse R: the world’s first mass-produced electric bike with a gearbox. It’s depressingly good.

August’s feast of features include Chaz Davies’ route from track to road, as FB’s columnist completes his CBT and attempts to gain a road licence via Direct Access. Plus, Roosty tours the scenic and very beautiful country of Luxemburg in search of cornering nirvana. He succeeded.

This month’s Used Buyer’s Guide is all about the Ducati 916 – celebrating 20 years of existence. And there are the regulars, like Bruce Smart’s penultimate entry of his around-the-world madness, all the latest legal advice, riding pointers and technical tips. Not surprisingly, most of the August issue’s attention was directed to the centre pages: Joey makes Tim Morris’ GSX1400 even better.

Making his last appearance in the mag (for now) is TT rookie, Martin Jessopp. The Yeovil man talks about waking up on the morning of his first Senior TT, crashing at the TT and getting away with it. MJ joins the Chaz Davies and Steve Parrish for their montly columns, and we’ve got an exclusive insight into the WSB underdogs in August’s race feature: Radical Rookies. MV Agusta’s factory effort, Alstare’s Bimota outfit, and the American/Indian partnership of Hero EBR go under the spotlight.