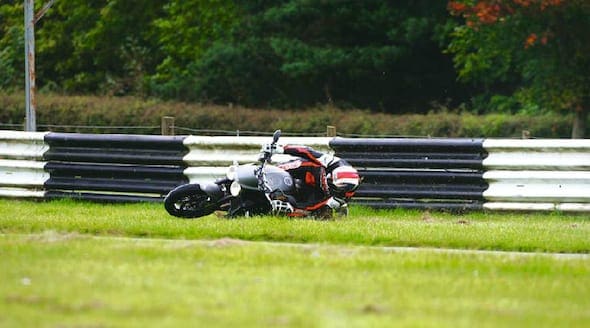 Fast Bikes magazine and White Dalton Motorcycle Solicitors are celebrating 10 beautiful years working together. To celebrate, we’ll be sifting through the archives and publishing the most informative, interesting, and funniest stories, and offering FREE legal advice at the same time. Since 2004, our legal pages have been compiled by Andrew Dalton and his bike-riding barristers and solicitors at White Dalton, offering real-world lawful advice on how to escape punishment, how to deal with court, and what not to do in the first place. Have a question for Andrew? mail@whitedalton.co.uk

Q – “I’ve had a bike accident, a proper nasty one. My right arm has been amputated, one of my ankles has been fused and I had some pelvis and lower back injuries, which have healed up well enough. However, I will neither walk properly again, nor grow a new arm. The insurers for the car driver have admitted their driver is to blame for the accident, and the insurers have made an offer for everything which the barrister and solicitors acting for me have said I should accept. It is for quite a lot of money. There is one big problem. Prior to the accident I was working cash in hand as a scaffolder, the money was not brilliant – about £75 a day cash and I worked about 20 weeks of the year. I didn’t claim benefits, and I earned enough to run a fairly tricked up ’Blade, my van and paid my rent. In the winter I went somewhere hot and did bits and bobs. I don’t really know how to deal with this. I learnt scaffolding whilst in prison for a violent offence, but that was eight years ago. My solicitors know none of this. I think I might get up as a dodgy, violent criminal. I know I didn’t pay tax and I have no accounts but I was earning.” Tubes, Greater London

A – The law is straight forward. If you had been claiming benefits the Court would be unlikely to award any loss of earnings. The Courts have said if you’re robbing the taxpayer it will not allow you to continue to do so and there are good reasons why the Court will not let benefit cheats get paid. However, you are different. Your work was not unlawful (unlike if you were running a brothel or a drug dealer) but you didn’t pay tax on it. Your circumstances where you spent more than half the year overseas may well have meant you didn’t have to pay UK tax anyway, but that aside, your lawyer’s problem is proving what you would have earned. I doubt that your cash in hand boss will say what he paid you as he was committing an offence. The Court would hear evidence from people who can say you did work. The Court can draw inferences from your pre-accident lifestyle (such as rent, receipts for your bike, entry visas) and the Judge will do his best to take this evidence into account and come up with a figure from which he will then deduct the tax you would have had to pay. Once you have enough evidence to show what you would have earned it’s straight forward enough. Most senior Judges (as you would have in a case such as yours) are not naive or stupid. You will have a harder job proving loss of earnings than someone who has wages or accounts, but you must discuss this with your solicitors. You need to help them prove this loss and a good place to start is by thinking hard as to who or what can back your claim up. Your solicitors need your help on this one. And don’t worry about your criminal past. The law says everyone has the right to be treated fairly, and your criminal past does not make your injuries any less. It may be brought up but it is pretty irrelevant