Although Silverstone isn’t renowned for always throwing up the best racing in the world, this weekend was an absolute corker to kick off the 2016 MCE Insurance British Superbike season. But do we expect anything less from the biggest domestic series in the World?

Race one:
After a stunning qualifying session at his first weekend back from injury, it was Honda’s Jason O’Halloran who initially stormed ahead momentarily in the cold yet dry conditions, with both Kawasaki’s James Ellison and Yamaha’s Stuart Easton starting from the back of the grid due to crashes in qualifying. It wasn’t long till WSB refugee Leon Haslam barged through on his JG Speedfit Kawasaki to take the lead, with Tyco BMW’s Michael Laverty in hot pursuit. It was an all out war at the front though, as Laverty, Dan Linfoot and Shane Byrne all make their moves at the front – until Haslam’s ZX-10R decided to let go leaving the Pocket-Rocket with a DNF on his return to the series.

This meant that Laverty powered through to the front however, managing to fend of Shakey in second place at the finish to take the win, while behind Luke Mossey, O’Halloran, Linfoot and Christian Iddon all battled for the final podium spot; finally going the way of Tyco BMW’s Iddon who snatched his first podium in the series. After a great battle Mossey, Linfoot and O’Halloran round out the top six, with Danny Buchan, Lee Jackson, John Hopkins and Tommy Bridewell nailing the top ten in the first outing of the season.
Laverty said after race one “It is difficult to just run out front and look at your lap timer. I only looked at my pitboard once as I just wanted to concentrate on being as smooth as I could and not making any mistakes and the toughest thing was mid-race as my hands went a bit numb –perhaps as it was a bit cold out there!” so maybe he needs to get those heated grips back on the BMW S 1000 RR…


Race 2:
And if you thought race one was good, wait till you see race two! Undoubtedly an underdog of 2016, Hickman got off to a blinding start, with himself and Laverty swapping places for the lead until the Tyco BMW rider suddenly dropped back a few places, gifting the place to his teammate Iddon after getting the better of Aussie O’Halloran. 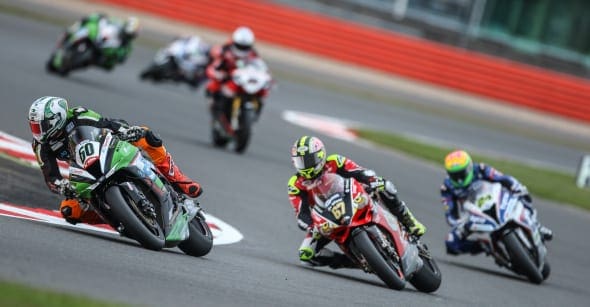 A lot of excitement was to boil right down to the very last lap, with Hickman and Byrne fighting till the very end. Coming down the Wellington straight the two were side by side, with Hickman running wide trying to defend into Luffield, Byrne jumped up the inside but got smoked on the drag to the line; getting the Be Wiser Ducati absolutely slideways and missing the win by 0.099 seconds.

Iddon and O’Halloran finished third and fourth in hot pursuit, while just behind the leading bunch Leon Haslam made up for race one woes with a top five finish. In fifth Laverty struggled to match his performance from earlier, Jackson had another blinding result in the top ten, Ellison climbed back up the order, and both Linfoot and Mossey grabbed a top ten finish before the circus heads to Oulton Park at the end of April.

And about those last few corners? Hicky was pretty honest about it all: “Over the last few laps the Ducati is so loud that I knew it was Shakey behind me. I did run a bit deep into Brooklands which gave him a bit of a shot at it and then that made me too tight into Luffield, so he snuck underneath. There was no way that I was doing all that work and not win though. I just pinned it and pretty much closed my eyes and it was enough to take it.” Fair play…