While the damp weather curtailed any really fast laps in MotoGP’s first practice session at Catalunya, ahead of qualifying and Sunday’s race, it played ball for FP2 – and it was game on.

It was a session where Jorge Lorenzo and his Ducati slotted in behind Marc Marquez’s Honda, albeit almost half a second down from the fastest man.For both of these men, this will give them something to smile about (possibly temporarily…) seeing as both endured torrid weekends at Mugello. Speaking of the Tuscan track, Mugello winner Andre Dovisiozo sneaked into fourth place with fellow Italian podium sitter Danilo Petrucci right behind him. 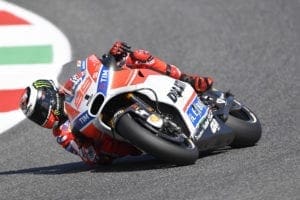 A few weeks ago Ducati and Honda tests at the Spanish track, so they’re reaping the rewards while others flounder on day one, with the factory Yamahas of still partially crocked Valentino Rossi and series leader Maverick Vinales in tenth and sixteenth respectively. Jonas Folger however, stuck in a great lap to go third. With Zarco stealing all the rookie thunder right from under him, he needs a few results (even in practice and qualifying) ahead of the Frenchman to prove his worth, even if he is already signed up with Tech Trois for 2018 already. 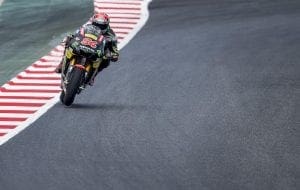 One more session of practice tomorrow morning, before qualifying begins, when we’ll have a far better idea of the potential race pecking order… 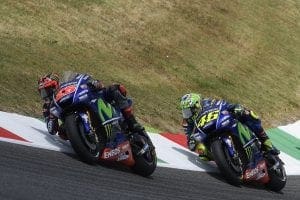