Some cracking snaps once again, this time covering last weekend’s Laguna Seca WSB round, by the man that is Kel…

We weren’t sure what to expect from Laguna Seca, given Chaz Davies’ back-breaking crash at Misano when he was accidentally run over by Jonny Rea. Yet his performance in the US of A just three weeks later was nothing short of astonishing – the man’s a machine! 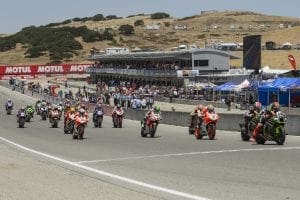 Of course, Jonny made hay in race 2 while Davies struggled to get through the pack, laying down a punishing pace so that neither Davies nor Tom Sykes could match or catch him. It’s a real pity, the points tally doesn’t tell the entire story of the season, nor how close much of the racing has been – but Jonny has one hand firmly on the title regardless…