With Leon Haslam in pole-position to take his first ever BSB title at the final Brands Hatch round, it seemed like a good time for he and team-mate Luke Mossey to sign on the dotted line to race once again for JG Speedfit Kawasaki in the best national Superbike series anywhere, for 2018…

“I’m over the moon to renew my contract with Kawasaki”, said Haslam, “We’ve all put a lot of hard work into producing a package, a structure and a team that can win this championship – it’s something we’ve been working on all year. I had some options to move to world level with Kawasaki but it was an easy decision to stay in BSB with Kawasaki and continue the project we started upon because I not only want to win the championship this year but next year as well. Also the work I do with Kawasaki Japan, like the Suzuka 8 Hours where we managed to get a second place, is all quite exciting and fun, and it’s fantastic to renew that and continue my relationship with Kawasaki in that respect.” 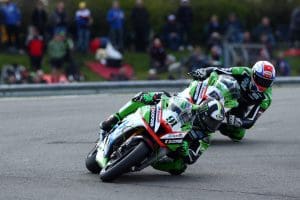 Despite Mossey’s injury, which curtailed his title charge mid-season, he is likewise enthused with his new deal.

“I’m really happy to be staying with JG Speedfit / Bournemouth Kawasaki Team and Pete for what will be my fourth year with Kawasaki. It’s a family run team so it’s a nice environment to be in and I get on really well with everyone so it was a no brainer to continue with Kawasaki for 2018. It helps that the ZX-10RR has been really good too – it’s an all-round good bike and I never feel like we have any tracks where we’re weak or at a disadvantage. I think we’ll be getting some upgrades next year so things are looking really good for next season and my goal is to be BSB champion.” 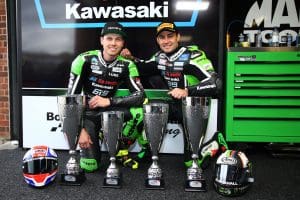 Team big cheese, Pete Extance, had this to say about retaining his current rider line-up.

“With two rounds of the showdown left to go it’s a great feeling and position to have our 2018 BSB rider line-up sorted, I couldn’t think of two riders I would rather have in the team for 2018. Leon has shown his worth already this season but he knows it’s now time to show he is worthy of a BSB title; I know Leon and his team members are capable of bringing the BSB title to JG Speedfit Kawasaki and Kawasaki UK along with hopefully the Manufacturers’ title too. Luke has had some bad luck with his injury especially after being so strong and leading the championship for so long. He would have certainly been a title contender had he been free from injury so for 2018 he will come back fitter and stronger and show that he too can fight to be the king of BSB. Massive thanks must go to JG Speedfit for their continued support in 2018 and that goes for all our sponsors and staff because without them we couldn’t go racing.” 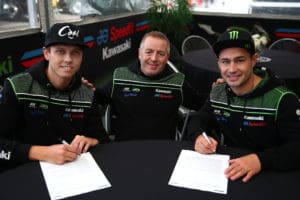