Bruce has just got back from the launch of the new 2018 Triumph Speed Triple RS, a full review of which will feature in issue 338, April ’18, out on March 6th – but for now, here’s five observations about the new Speed for you to enjoy…

1 – It’s a hooligan. Yep, Triumph’s rekindled that inner naughtiness with the RS, by allowing you to switch off tech’ such as ABS and traction. It’s great at wheelies, loves a burnout and its top end Brembo anchors make endos child’s play. 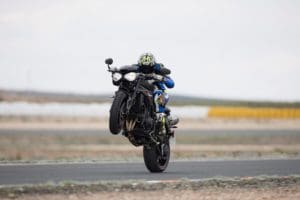 2 – It’s fast. Triumph have made 105 changes to the motor, which has seen power hiked by 7% (148bhp) and torque up 4% (117nM). But figures mean nothing. It’s the way in which the Triple delivers its potency that will make its rivals edgy.

3 – It’s no longer a technophobe. With a new 5” TFT dash that does everything short of making you a cuppa, it’s fair to say the Trumpet’s finally moved on from the stone-age with a decent range of hi-tech features. 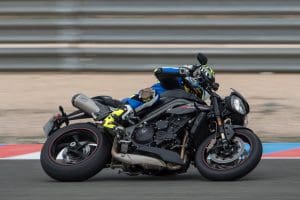 4 – It’s one hell of a hustler. Losing weight and introducing top-spec Öhlins to the mix has taken the Triumph’s handling to the next level. It will muller sportsbikes on twisty mountain roads, and do a pretty good job of keeping up with them on track. 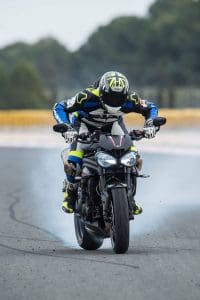 5 – It’s still versatile. Triumph’s not gone mad with changing the core values of the bike. It’s just as practical in town as it is on B-roads, and gadgets like heated grips, cruise control and a blipper/shifter combo have made the bike even better to ride.