Young Carl pulled the lucky number out of the hat and went off to sunnier pastures to test the new KTM 790 Duke ‘Scalpel’! Having just got back, he’s checking in with five brief observations of the nutty new machine, prior to the full review to be featured in issue 339, out on April 3rd!

1 – It’s got all the electronics you could ever want, and some you may not even need, but it’s fully stacked. Four rider modes of Rain, Street, Sport and Track. It has MTC traction-control which is linked to rider modes, plus the option to turn it off. An up-down quick-shifter, MSR engine-braking system, Bosch cornering ABS and even a ‘Supermoto’ mode!

2 – KTM have been hard at work on their first ever inline-twin, called the LC8c (the ‘c’ stands for compact), claiming a whopping 86Nm of torque with a peak horsey figure of 105bhp – let’s just say, all that hard work has paid off beautifully.

3 – The chassis is impressive, using the engine as a load bearing component, meaning the frame et al weighs less. Matched with the 43mm WP front fork and WP rear shock, it works like a dream. 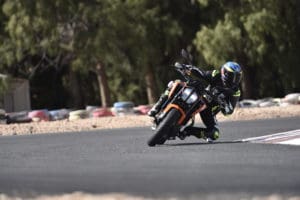 4 – The Maxxis Supermaxx ST tyres offer a lot of grip, and have been developed specifically for the 790 Duke. They helped make both road and track work a cinch.

5 – It’s a ridiculous amount of fun! Seriously, off the bat KTM will be worrying the established players in this class, not just through usability, but through on par (or even better) levels of hilarious fun it can generate. 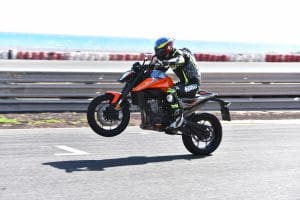