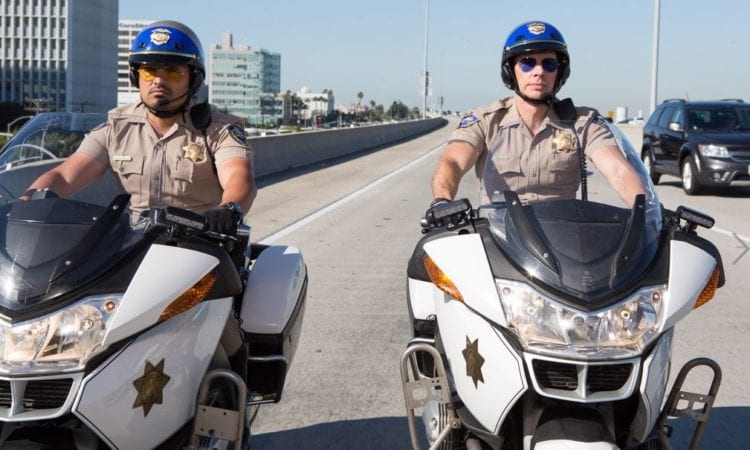 We’re not film critics here, er, obviously, but our beloved motorcycles do appear in a lot of films and TV shows. How they’re presented on screen though, well, that matters to us more than we’d like to admit…

So we’ll start checking out how bikes fare when on the screen. As bikers, and especially savvy ones, there’s nothing more irritating when a bike (or riding) is horribly misrepresented. Never mind all of the over-exaggerating riding styles stunt riders are encouraged to do (so it looks more involved on screen), making sure a bike just sounds right always seems pretty low in the priority editing list. 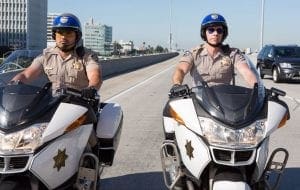 Anyway, CHiPS, for those not aware or too young to remember, is a(nother…) comedy remake of a 1980’s TV show (please, somebody make them stop!), which follows the adventures of bike cops Jon Baker and Frank ‘Ponch’ Poncherello (played here by Dax Shepard & Michael Pena, respectively), with a half decent back-up cast including Vincent D’Onofrio . It was released in UK cinemas back in March, but a DVD/BluRay release is incoming, you can stream it on Amazon (and other digital outlets), and some may catch it on a long-haul flight, as we did.

The bikes mostly on show are their BMW cop-hacks, and a slew of Ducati Hypermotards, plus an obligatory Harley Davidson and the odd MX’er clip thrown in. For the riding action part, most of it gets the thumbs up from us, there’s some good sideways stuff going on (especially on the BMW RTs, on dirt!) and the Hypers get centre stage most of the time – Ducati sure know how to milk the movie world! Yeah, there are sometimes wheelies pulled for no apparent reason but, hey, we’re the last people that should ever complain about that! There is also some half-decent research done when the bikes are discussed on screen, as it all seems above board. The only fly in that ointment though, is that we reckon a Hyper may struggle to hit over 150mph, but then this is Hollywood… 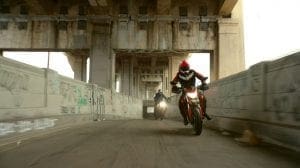 Sound-track wise, bikes sound pretty good here. The Hypers sometimes sound a bit like a cross between how they should, and a high-performance single, but it’s acceptable and far better handled than bikes often are. And that is important to us as bikers, because suspension-of-disbelief is crucial to film-makers, to keep audiences invested in what they’re watching. For a biker, nothing snaps you out of that more than seeing a bike on screen but hearing something completely different! Even the utterly brilliant, Dunlop-centric ‘Road’ documentary is guilty of this – a clip of Joey Dunlop at the TT in Y2k, on Honda’s SP1 V-twin, sees Joey cross the screen – but to the wail of an inline-four. A small thing perhaps, but this was also at a crucial moment where the emotional tension was being wound up, and you have this brief twinge where for a second you’re brought out of it because, yet again, as bikers, your brain instantly tells you – that’s wrong! But, anyway, we digress…

As for the movie itself, well, it got eaten alive by critics and currently carries an appalling 16% rating on Rotten Tomatoes. However, Shepard and Pena seem to be decent comedic actors, and there are enough gags in here to make you at least smirk a few times in between the biking stuff. That being said, and like many of these kinds of recent modern comedies, there are probably a few dozen too many dick and ass jokes (on about a 5-1 ratio) – probably not the kind of comedy your mum would want to watch! 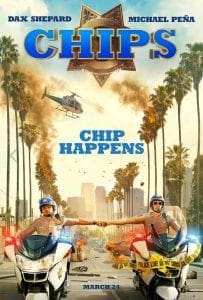 Yet, here’s the thing. For starters, it’s far more likely you’ll actually (at least half) enjoy a movie that’s been roasted and bitched about – low expectations, and all that jazz. Additionally, we (as bikers) are likely to get a lot more out of a movie like CHiPS. The bike action is okay, and treated with just enough respect for us to not get annoyed (like we do with so, so many other movies featuring motorcycles), and the rest of the film isn’t quite terrible enough to go watch paint dry instead. Yes, it’s not genius, but also not quite as bad as it’s been made out to be, either…

You can check out the trailer below.