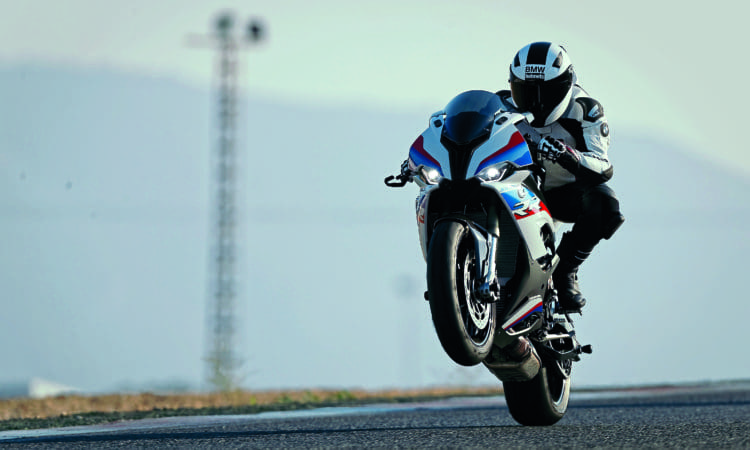 What started as a whisper has finally come to fruition, and not a day too soon. The power’s up, the weight’s down and the sophistication of the Beemer is set to be the envy of the sector. Are we excited about this third generation Bahnstormer? You better believe it. Here’s a breakdown of what we know so far… 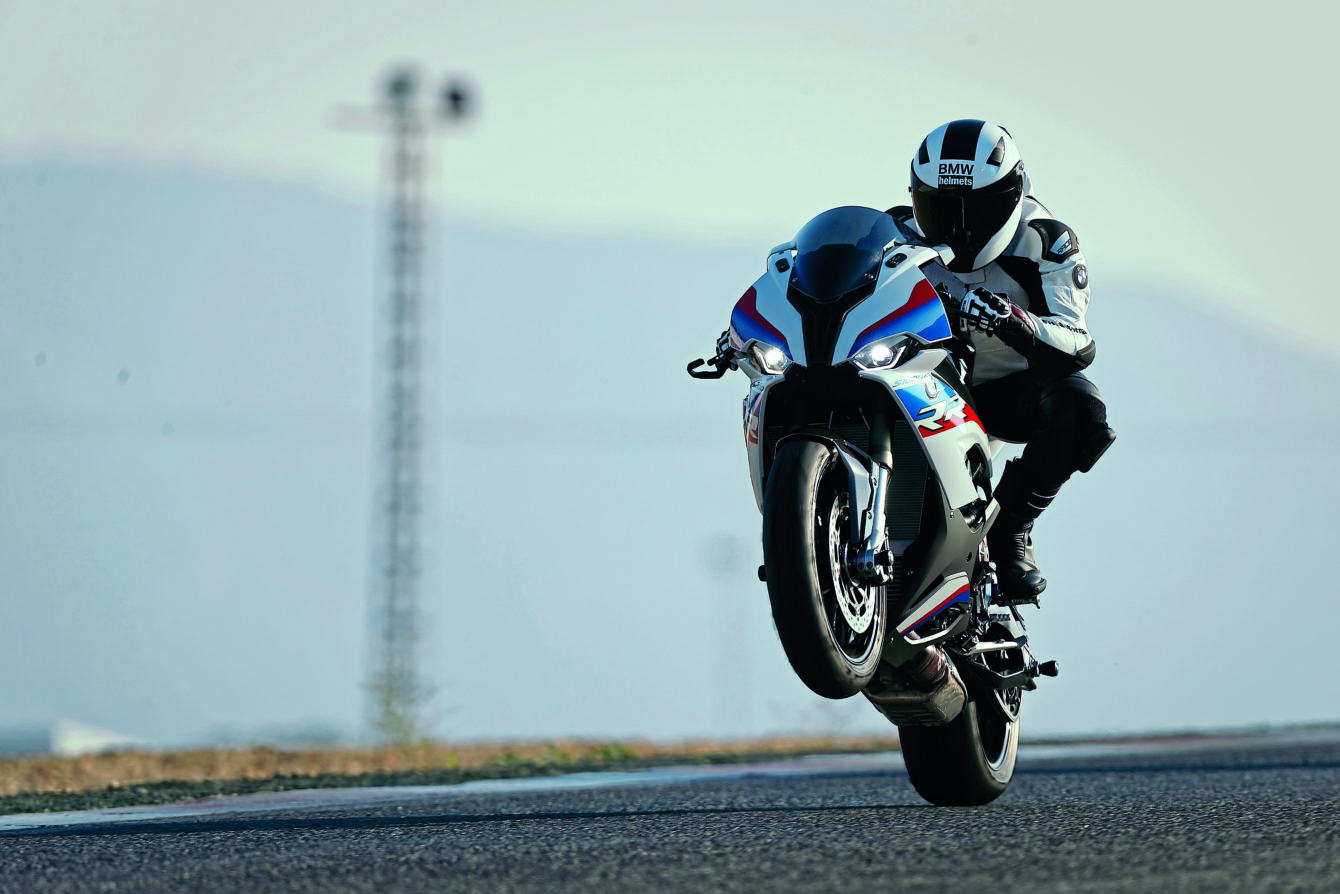 Its engine’s a wholly new design, weighing some 4kg less than its predecessor and armed with an extra 8bhp (204bhp). The torque’s also up, with a claimed 113Nm ready to be exploited. Figures aside, the biggest change to the slimmed down inline-four motor (12mm narrower) is the utilisation of a fancy variable valve timing system, dubbed ShiftCam. Working in tandem with the newly designed cylinder head’s intake and exhaust ports, the ShiftCam system alters the valve timing and valve intake stroke at 9,000rpm to optimise performance capabilities. It’s all very clever stuff, offering more clout throughout the entire rev range. Better still, for the bean counters out there, it also makes the motor 4% better on fuel consumption.

Every inch of this motor is  cutting edge, such as the hollow-bored valves that save precious grams from the mix and allow the motor’s revs to be upped from 14,200rpm to a new ceiling of 14,600rpm. These are just a few of the innovations to mention, but the gist is BMW’s gone to town on this motor, leaving no rocks unturned  in its implacable pursuit of pony punching perfection. 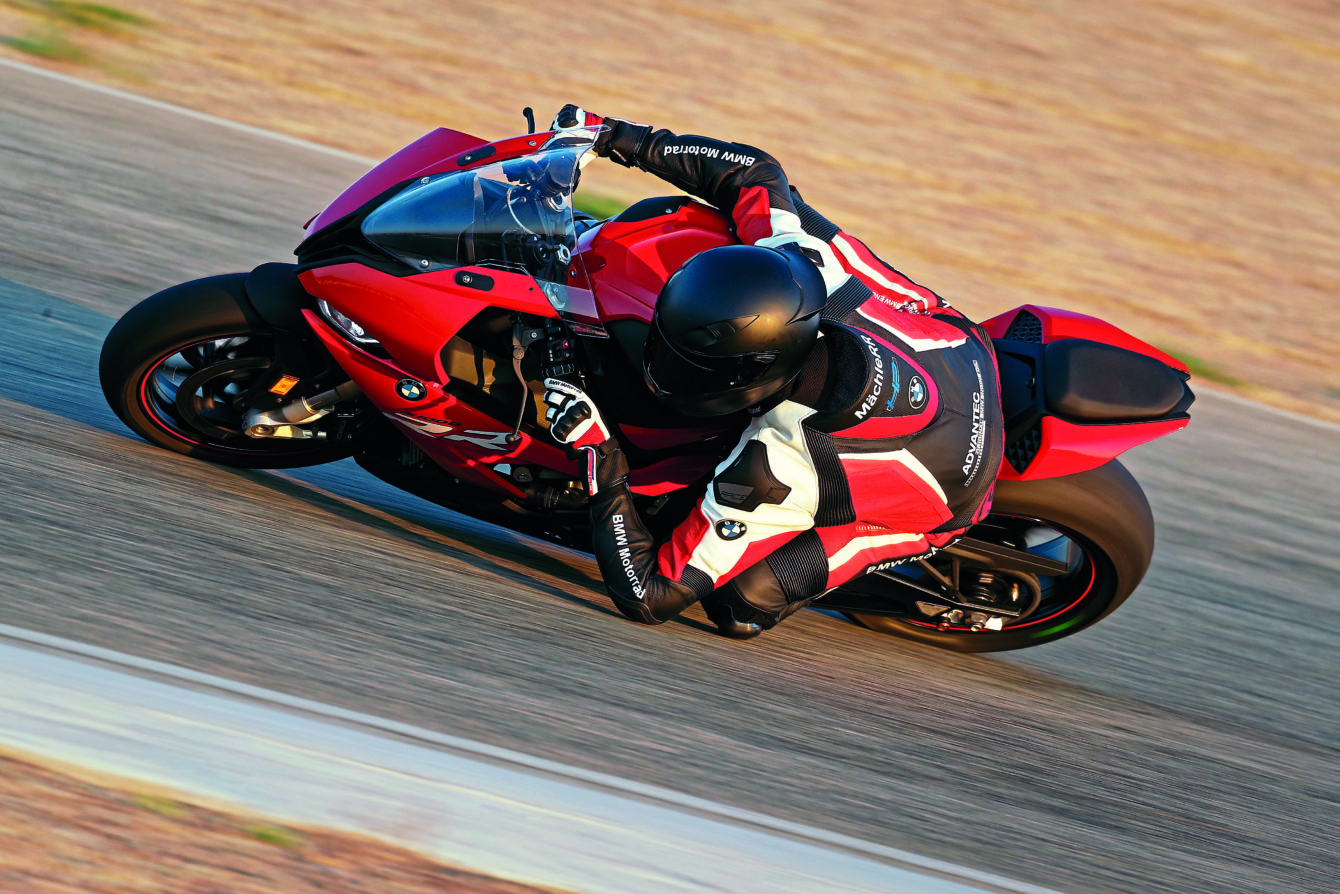 Power’s nothing without control which is why the smart folk at BMW have paid a whole lot of attention  to the handling prowess of their flagship sportsbike. The centrepiece of the RR is an all-new aluminium bridge frame, sporting radically different geometry (the steering head angle is 0.4° steeper and the castor reduced to 93.9mm). Some 1.3kg has been shaved from the unit, which puts more dependence on the motor as a load bearing unit. By carefully calculating the engine’s positioning and distribution of weight, BMW claim to have optimised the stiffness and flexibility of the chassis. The funky looking tubular subframe has also made a big impact in the weight saving department, while the revolutionised, 300g lighter underslung swinging-arm is said to aid stability and encourage higher grip levels. All good stuff, eh? One other major factor in the new approach is an increase in front  end bias, up from 52.3% to 53.8%.

Keeping the front wheel well and truly planted (when you’re not pulling massive wheelies) is the Beemer’s new 45mm, USD forks that boasts a fully-adjustable, closed cartridge system, and saves 300g when compared to what’s come before. The rear shock has also been revolutionised with an increased stroke and bettered damping characteristics. It’s also been repositioned further from the swinging-arm’s rotational axis to encourage a more supported and fluid function. An unavoidable factor in the BMW’s new handling arsenal is its slimmed down weight. The RR is some 11kg lighter than before (the wheels alone save 1.6kg of unsprung weight) which will undoubtedly prove a massive aid whether you’re hustling through road works or scratching on track. 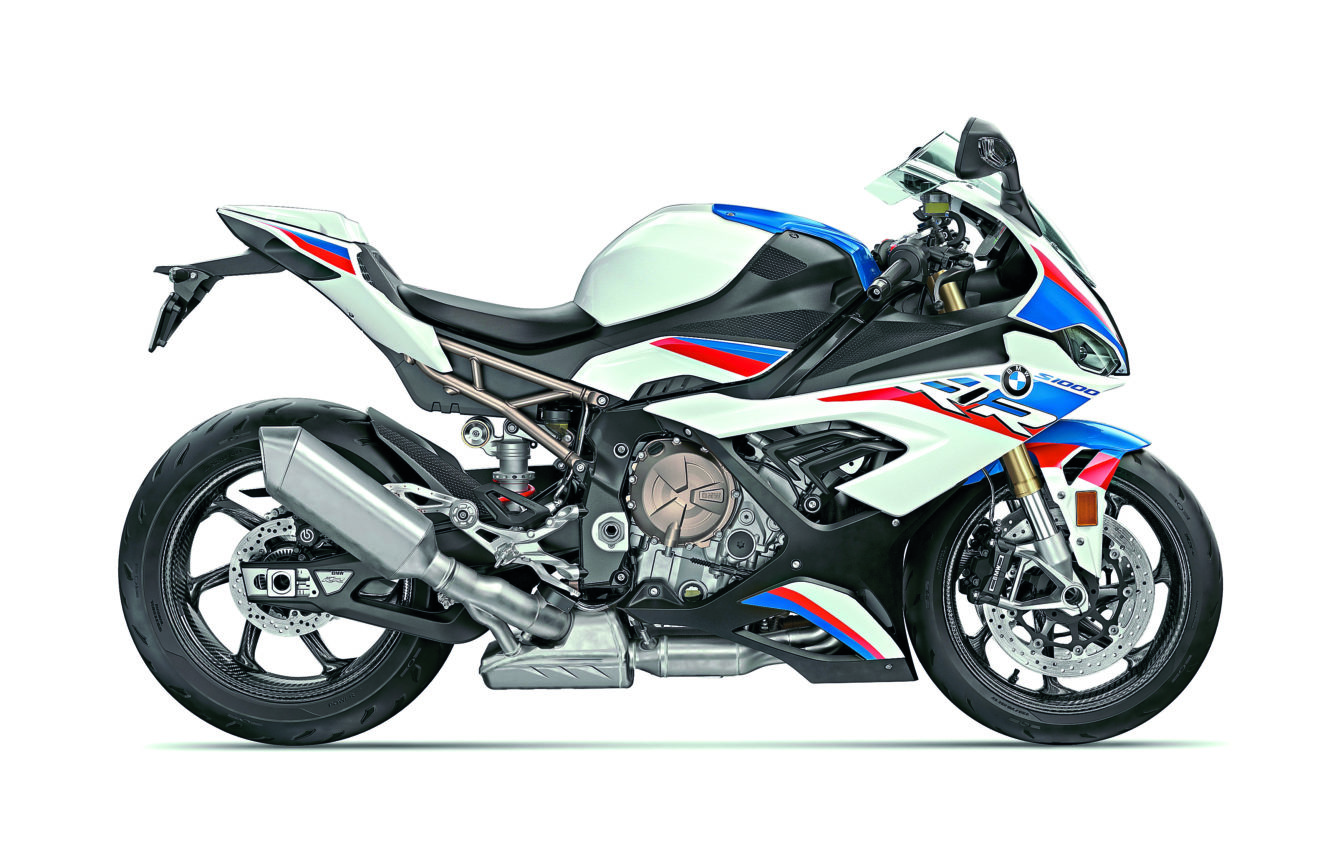 From every angle the new RR looks razor sharp and track inclined. It’s sleeker, sharper and fettled for function. Gone are the iconic, sizeable asymmetric lights of old; in are smaller, punchier race-inspired options that save precious weight and give the BMW a new face. The whole package is more compact, too, with a lower front end and a stubbier, more stylish rear to round things off. The bike’s wheelbase might be marginally greater than that of its predecessor, but with sharper lines than you’ll find in a chat-up book, the RR’s looking categorically smaller and racier. That demeanour is enhanced by  the use of minimalist LED lighting all-round, giving the bike a much needed fresher look. But the real gem in the package has to be the 6.5in TFT dash that takes the BMW’s cockpit to a whole new level, and delivers the clearest platform yet for the RR’s arsenal of tech. 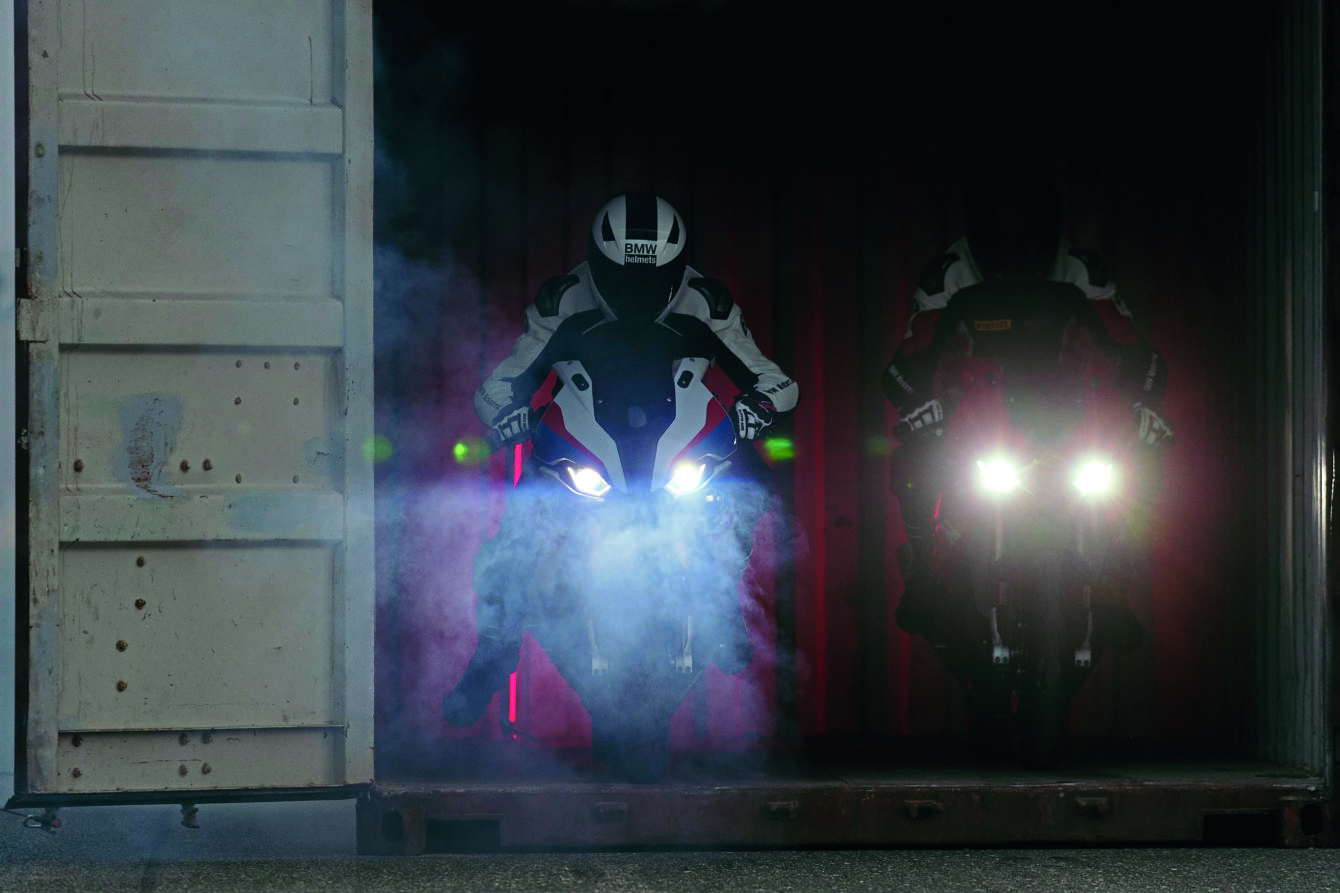 The core of the new S 1000 RR’s electronics package really is that TFT screen. It’s been newly developed to maximise visibility  in difficult light conditions as well  as providing the rider with the information that he (or she) needs. You will be able to tailor the display for different uses – for example the ‘Pure Ride’ screen provides information required for normal road riding whereas the three ‘core’ screens are designed for the race track. Rider modes ‘Rain’, ‘Road’, ‘Dynamic’ and ‘Race’ are standard on the new S Thou’ but for track riding and racing, optional ‘Pro Modes’ offer another three riding modes: ‘Race Pro 1, 2 and 3’.

These can be programmed for different levels of traction control, ABS, wheelie control, throttle map and engine braking. ‘Pro Modes’ also include launch control and an adjustable pit lane limiter. The Beemer is fitted with a new six-axis sensor cluster to which all the control systems are now linked. This allows the ABS to go a step further and offer increased control when trail braking with ‘ABS Pro’, and a wheelie function within the DTC (Dynamic Traction Control) system to curb those inevitable power wheelies. Sorry, officer!

For more info, all the tech-spec goodness and everything you could ever want in your life, make sure you pick up the print magazine!