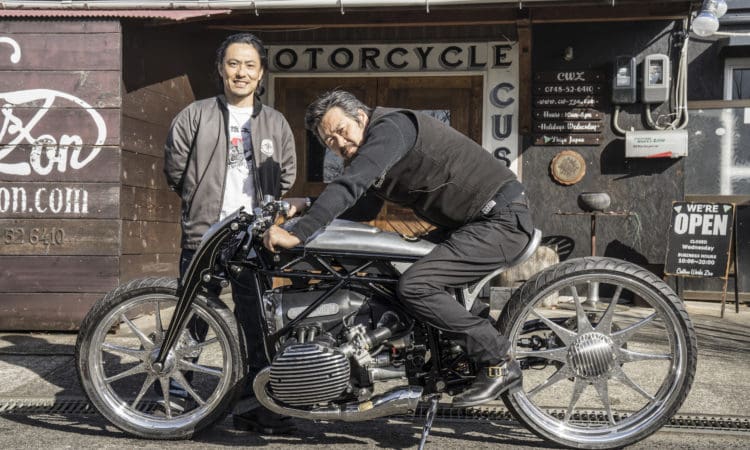 …at a mad hipster custom show in Japan!

Slept off the Xmas dinner yet? We’ve just about cleared the decks (although there’s a box of min Waitrose mince pies still unopened in the cupboard ffs), and getting set for 2019. One thing we missed just before Festivus, though, was this little gem. It was released on the BMW press site, and passed us by in a frenzy of selection boxes and last-minute present buying.

Now, on the face of it, it looks like a right pile of nonsense – and nothing to do with us here at FB. It’s a mad old-skool custom, dubbed ‘THE DEPARTED’ in the usual am-dram custom style, and was built by a Japanese outfit (CUSTOM WORKS ZON) who normally seem to specialise in Back Street Hero-type Harley machinery. The silly 21-inch front and TWENTY-FUCKING-SIX-INCH rear wheels are super-skinny, and the back tyre is actually a front fitment, which is par for the course on this type of BS it seems. We didn’t actually know a 26” bike tyre even existed, so we’re grateful for that learning at least. Girder front end, teeny single front brake disc – it ticks all the other ‘bollocks’ boxes too, and was right at home at the Hot Rod Custom Show in Yokohama.

So far, so shit. But hang on a minute – that engine looks mighty weird the closer you look. Are those pushrod tubes above the cylinders? The head covers seem to be hiding some genuine madness too. Okay, the carbs are clearly aftermarket bolt-ons, but the rest of this engine looks strangely ‘factory’, yet unfamiliar. There’s a shaft drive obvs, and an old-fashioned airbox as part of the crankcases, but the finish on the castings looks like a very modern production process has been used – and the thing is held together by some very 2019-looking Torx bolts.

We open the press release PDF, and see the magic words: ‘The centerpiece of the machine is the prototype of a completely new boxer engine.’ Now, in an official BMW PR, this is big news – it’s one of those hints that the firm throws out before it releases new models, like the RnineT prototype built by Roland Sands shortly before the production bike appeared. More official lines from BMW? ‘Further details about the engine and its possible future use will be communicated at a later point in time.’ So there you go.

What the hell will this new engine be powering then? Well, sadly, it won’t be knocking the S1000RR and S1000R off our ‘fave Beemer’ list – rather it looks like it’ll be fitted to something properly retro. BMW speaks about the engine having a large capacity, and that, together with a pushrod OHV head design suggests a low-revving, grunty beastie. A new generation R1200C cruiser (above) perhaps? Most likely, yep. We doubt there will be a 26-inch rear wheel (though you never know!), but BMW never replaced the old custom Boxer when it was dropped in 2004, so something along those lines would seem likely. The fact the story came from BMW USA’s press page further hints at where they’re going with this.

We’re optimists here at FB Towers though, so are holding out for a retro racer replica too – a supercharged 1,500cc Boxer with a beaten aluminium dustbin fairing for us to live out our pre-war ‘Brooklands lap record’ fantasies. In the meantime, it seems prudent to expect some sort of new custom cruiser machinery from BMW soon…