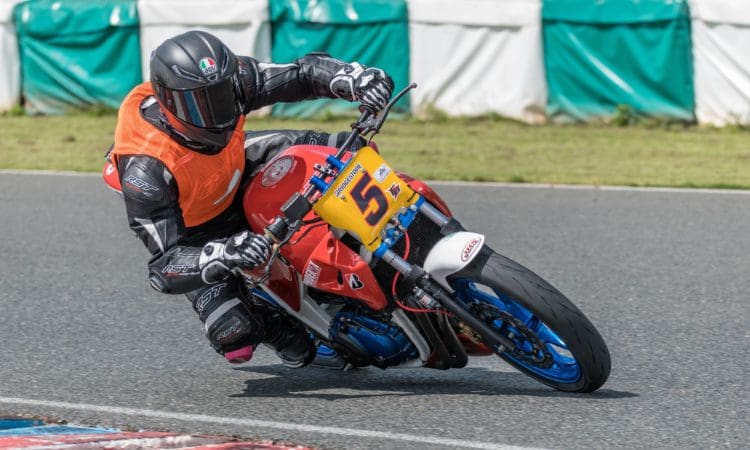 I wasn’t ready for this; I don’t mean the actual racing of the Bridgestone 500s with EMRA, but the rollercoaster ride of emotions that a single weekend can throw at you.

Round two started well enough, team-mate Gaz rolled into the paddock on the Saturday evening in his new toy, a motorhome with all of the necessary mod-cons including workshop in the back for his bike etc. This is a purchase that we all benefitted from, especially me who had an instant shelter for my bike and no need to struggle with an awning as Jimmy Reynolds was doing to our right and Nick Hyde and James Barley from LBR Racing were to our left.

These boys were all evidence that our video from last season helped getting new riders onto the CB500 grid, and bring a lot to the party. In fact Nick presented me with what will probably be my only trophy this season – a mug with Posh C**t written on it – charming, and a great example of the friendships that you can make almost immediately with the common interest of racing within the paddock.

All set up and ready we had a few easy beers before I dived into the back of my van for the worst nights sleep ever, while Gary languished in abject paddock luxury – though for Gary he needed a decent nights sleep for the day he was about to have.

The schedule was pretty intense, racing as we are in both the Bridgestone 500s and Mini-twin race. So it was Practice, Qualifying sessions 2 and 6, followed by race 2, 6, 8 and then all the way back at 18.

The first qualifier was a jumbled affair, all of the CB500s out in one go made it very hard to get any clear space. I hadn’t ridden the CB since the opening round and was also in my spanking new lid – the AGV Pista GP R and a pair RST Trachtech Evo 3 boots so not only rusty but a little unfamiliar with my gear, it took a while finally posting a half decent 1:05 in my 9th and final lap.

Things improved for me in the Minitwins, dropping a further second off my lap time but this was all marred by the absence of our Gaz. He was having problems with his bike, only completing a lap in the CB500s and wasn’t even on the circuit for the Minitwins.

The first 500 race came round too quickly for Gary, he tried but the bike was not playing ball and I had other things in mind, both Nick and James of LBR had qualified ahead of me and I was having none of that.

It doesn’t take long to develop a rivalry, these boys have been after me from the start and I could feel the smiles burrow into me when they received their qualifying times. This was the first time I have actually ‘cared’ about who I needed to get in front of bar Gaz who is still lapping seconds ahead of me, but these guys are close and it wasn’t going to be easy.

So, shit start as is the norm I had Nick #168 in my sights and quickly got alongside and edged past after a couple of laps; James #141 was not too far away but it took my best lap ever round Mallory and braking later than ever before to get round him on the outside swinging in right around Edwina’s to finally get the edge.

What a feeling, I cant remember a time I have enjoyed so much on track and despite having James’ breath on the back of my neck for the remaining laps managed to hold the lead finally making 3 seconds on the pair of them as they came in neck and neck with mere 100ths of a second between them.

We didn’t meet again on track, with three races in the 500s they were both out in the final race, whereas I was in the second of the day. The Minitwins followed and Gary was finally on the grid at the back having had Mick, Chris and others all scurrying around his bike to get it firing again.

Just ahead of me on the grid was Nigel Lunn #111, a bright pink CB and someone I had chatted too a few times. He would be my target for this race as I knew from the timing sheets we were at a similar pace.

As we left the line and headed to Gerard’s we were all bunched up, looking for space meaning that the majority of the pack ran wide, as we did I saw Gary coming from the back hugging the inside line – bastard pretty much took the lot of us – and fair play to him he was gone.

This left Nigel and I to play, and play we did swapping overtakes throughout the race, Nigel diving in at the hairpin, me waiting for Gerard’s to either sweep round the outside or get enough run in to Edwinas to have him on the brakes.

This continued for the next three races, Nigel won the first battle in the Minitwins, I won the second by a second in the CBs and then heading into the final race of the day we were even.

In the end it was all tit for tat again until I over-reached my braking marker and had to pull the rip cord down the escape road as I tried to pass Nigel in the same way as I had James earlier in the day. That lost me about five places and I was out of the hunt, but you have to try these things don’t you?

Words cannot describe the exhilaration, the gritting of the teeth and the joy of battling for places. I apologise to Nigel straight out for the things I called him on track inside my AGV, and in the same breath thank him for handing over a set of coils to our Gary that got him back out again and fighting his way to 3rd in the CB section of the Minitwins championship.

This CB racing is proving to be like Rugby, Fight like F*** on the track – and buy each other a beer at the end. Its genius, it really is.

Next Round  – Mallory Park 9th June

Massive thanks to  – David Chapman & Glyn Richardson for use of their images.