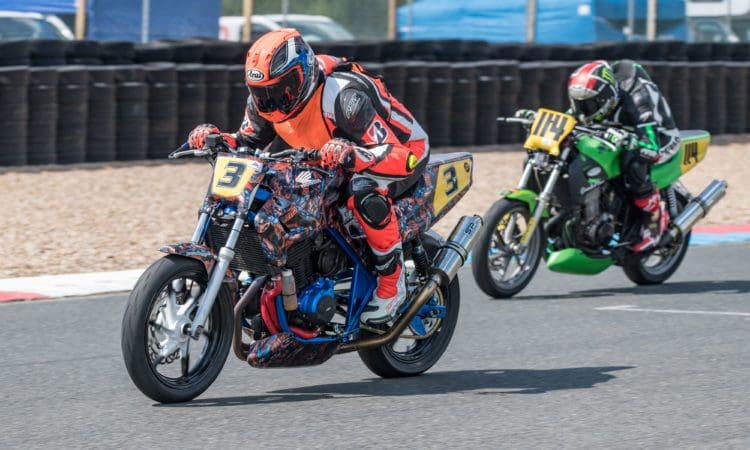 …and it all started so bloody well.

I had a stroke of luck searching for a motorhome after Round 1. Despite living close I am not missing out on the paddock life and sleeping in the back of my van prompted a purchase. You don’t make money keeping it in ISA’s nowadays anyway so was greeted by Charlie and the chaps in my new IVECO motorhome. Factory.

But that, along with knocking up a proper breakfast for the lads was where my luck ran out and apparently bad luck comes in 3s? Well, that’s what the myth says, but for Round 2 of EMRA’s Bridgestone 500’s and Mini-twin racing it came in waves. Lets start with a flat battery, then move on to blocked carbs, a loose clutch adjuster and then chuck in a bolt that had self extracted itself from the engine block, which resulted in a black flag and more oil than the North Sea.

All these at different times of the day meant I had a lot of catching up to do as I’d missed qualifying in both the Bridgestone 500s and the Twins’ class.  So back of the grid starts it was.  Race one was the Bridgestone 500s, I took my place on the grid but bike just didn’t feel right, it wouldn’t rev out and certainly wouldn’t pull a greasy stick from a dogs tea towel holder. I managed the warm up lap, but it was back to the paddock for more investigations which lead my trusty team of mechanics finding blocked jets in the carbs.

A quick flush of the tank and some blowing out of the jets and she was revving. Cool, lets go racing. Next up was the first Twins race of the day, I got a good start which saw me overtake a few riders into Gerard’s and a bit of chaos saw many run wide so I dived up the inside halfway through turn 1 and took a few more.

As I picked a few more off the gears became more and more difficult to select, pulling the clutch in did nothing so I now had to change down with no clutch. This I somehow managed and came home in 17th which was not too bad considering. The problem was diagnosed as a loose adjuster nut on the engine casing so nothing major. Not too bad.

Finally out in the Bridgestone 500’s race 2 and the bike felt great on the warm up lap and I was ready to get going, another great start saw me pick off what seemed to be double figures and they just keep coming. By half distance I was up to 10th with 9th, 8th and 7th right there but this was to be the end as at the start/finish line was a black flag with my number one it!

A very reluctant return to the pits showed the marshals were absolutely spot on, there was oil and smoke pouring out everywhere, they not only saved my bike, they saved me from a potentially nasty crash had oil found its way onto the rear tyre. Investigations found a little bolt nestled under the starter motor which ended up being the culprit having investigated all via removing the tank, the carbs etc revealing a little hole in the back of the engine block.

I had already packed up my leathers, but the bike was sweet again and out they came. Cool, lets go racing. Our final race of the day was the Minitwins again, my grid slot for race 2 was 17th as I had actually finished the first race in that spot. The twins race features up to 500 twins and then 501 to 650 thus a host of SV650 etc in there, too.  The classes are split into 2 so although 17th on the grid, this was around 8th in class.

I seem to have got my starts in order another saw me keep up with the much faster accelerating 650s and after a few laps I found myself settled in a battle with Mitchell Baines. My problem, though, is I’m probably 20 stone in kit. Following me must create the best slip stream ever and considering the CB500s are only 50bhp I stand no chance of keeping up with much lighter riders behind me on the straights. Still, an overall position of 14th and 7th in class wasn’t a bad end to what was a very emotional and testing race day for all of us.

A massive thank you to Chris Smith, Mick Gleaden & Lewis Bramwell for sorting out the issues.  Also a big shout out to Nigel Lunn and Nick Rogers for the coils. I really would not have started a single session or race without your expertise, skill and generosity, and that’s why I love this class.

See you at the next round? – June 9th, Mallory Park.

Thanks to David Chapman for a couple of the images too – Cheers.