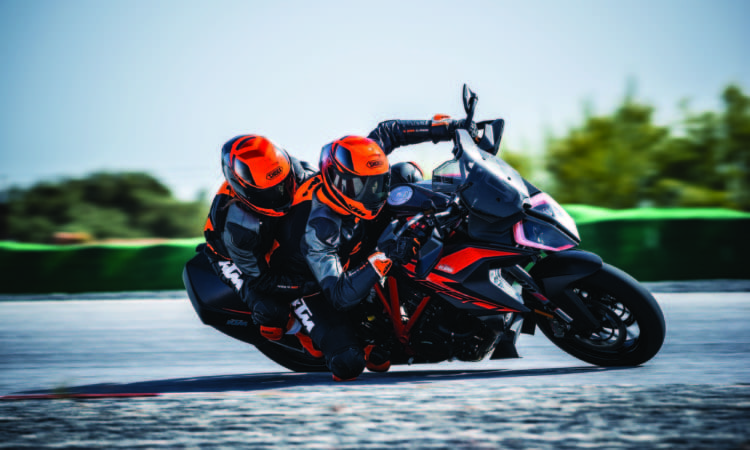 The future isn’t as good as it used to be. We’ve not got flying cars, holidays on Mars, or chicken dinners in a pill just yet. But KTM has brought out a little taste of the Bright New World that awaits us, with a digital suspension upgrade for the 2016-18 Super Duke GT.

Essentially, the firm has honed and improved the ECU programming for the WP semi-active suspension package. And rather than just giving it to 2019 buyers, the firm has managed to make it available as a free digital upgrade – all you need to do is get along to the dealer and pay half an hour labour for the download and test.

According to KTM, “The reaction, response and accuracy of the semi-active suspension has been drastically improved, with software development moved completely inhouse to KTM. New algorithms now see triple the number of damping curves than previously available, meaning the bike’s ECU has less calculations to do in rapidly creating a ride quality to match the current surface.

“Accessible at the push of a button and instantaneously delivered during riding, the parameters of the three available settings, Comfort, Street and Sport are further defined. The anti-dive function has also been removed from the Street setting, with its damping characteristics improved.”

And since the 2019 bike has the exact same hardware as the older bikes, it’s a simple job to download the new programs into the ECU.

Good stuff from the mad Austrians – and hopefully, a sign of what’s to come from the bike firms. BHP-boosting downloads, better traction control and ABS algorithms, enhanced electronic suspension via WiFi? Just the job to pass the time while waiting for your Mars holiday to come along.