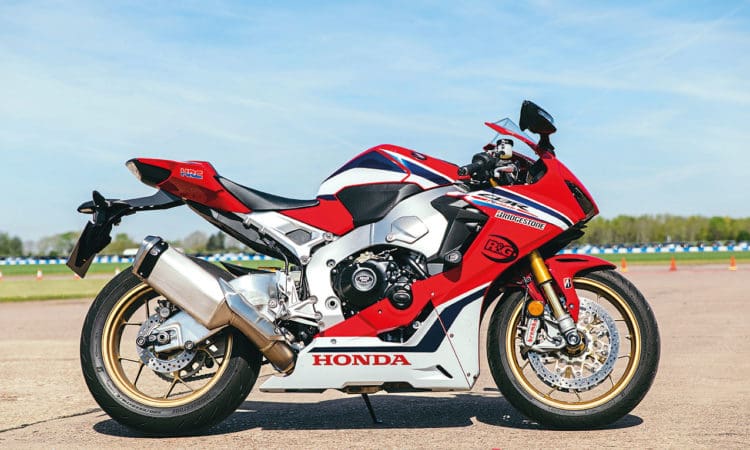 There is no such thing as a bad Fireblade, but when the 2017 version appeared on the scene there was certainly room for improvement… and Honda knew it. So that’s why we’ve got this, the slightly tweaked 2019 Blade.

The gold-coloured wheels denote that this is the SP version, which comes with electronic suspension and a few other bits of bling, but it’s still got the quintessential look, feel and smell (probably) as any modern ’Blade you care to come across – jump on it and you’d be hard pushed to tell you were on a ‘new for 2019’ bike.

The dash does some funky things with a Fireblade logo when you turn the key and the engine hums smoothly into life when you press the button… so far so good. With the engine running the suspension felt noticeably softer. It was set in A2 when I started my test ride and felt really rather composed for an everyday riding pace.

Honda reckon they have worked on the electronics, which I’m sure they have, but I still struggled to get used to the fly-by-wire throttle on the Blade.

There was next to zero play in the throttle, so a couple of times I found myself inadvertently opening the taps up when running over a bump in the road or reaching for the front brake, which I didn’t like at all. This did seem a little easier in the lower power modes, but who wants to run around in anything but full power? Not me.

With the traction and wheelie control turned on, the Honda turned into a bit of a nail when you started riding it fast. Even on the lowest setting of both, any detection of wheel spin or a wheelie would quell the power severely (albeit not aggressively), really impeding your progress. And it wouldn’t be so bad if it re-instated the power once you’d stopped wheelieing or wheel spinning, but there was a serious lag between returning to two wheels on the tarmac in line with each other, and being able to use all of the bike’s power. It was really annoying so I turned it off. Turning the systems off is a nuisance in itself – you need to be in ‘User’ mode to start with, then there is a procedure of pressing and holding, which eventually turns both aids off. Honda might think they have sorted the electronics, but I’m not so sure.

I’d struggled with the gearbox on the previous Blade. I’m not sure if it was due to the mechanics of it all, or the shifter, but I had no such problems with this one. The shifter and blipper both worked perfectly, and there were no fluffed up or downshifts, but in all honesty, the shifter felt more like a shift assist, rather than a quickshifter – it wasn’t particularly fast, and it didn’t give the Fireblade much of a sportsbike feel.

The brakes were nice and sharp and definitely did give the Blade a sporty edge, but you had to be careful not to over-squeeze the lever – too much anchorage made Mr ABS come out to spoil the fun, but I guess that’s par for the course in 2019. It certainly wasn’t the worst, or most intrusive ABS system on the test.

The electronic suspension made life really comfortable, and you could really tell the difference between the different modes. I set the pogos to A3 to deal with the lumps and bumps in the tarmac and it was lovely, but it did feel as though I managed to bottom the forks and shock out once or twice, by giving it too much welly through some dips in the road.

The ride was smooth and so was the engine. In fact, the Blade engine was very smooth; some might say too smooth. It was fast, and would really get a move on if you were to make it sing, but for me it lacked a certain je ne sais quoi. I didn’t feel like it was an inherently exciting bike to ride.

Yes, it could be ridden in an exciting way, but you had to be prepared to give it some. And even when you do, the chassis is that good, you struggle to make it do anything untoward – a victim of its own magnificence, you might say. If you want a bike to look after you, get a Blade. If you want ‘edge’, don’t.

If ever there was a bike that didn’t live up to its potential on track, this would be it. There are a couple of bad bits that really hold it back, and outright pace is right up there (this was the slowest litre bike in terms of speed).

It’s crazy because the urgency of the Blade’s initial throttle would make you think you’d just straddled a bronco and had whipped its arse, considering the urgency with which it propels you forward… but that’s where the urgency ends.

Very quickly, it starts to feel comparably slow against its rivals, and that feeling gets exemplified with the addition of gears. That said, the soundtrack would make you think otherwise, as the Honda loves to howl, and it doesn’t half sound good!

The stock shifter is good and the blipper isn’t the worst on the market. The standard traction control probably is though. It’s pants, regardless of which of its many settings you’ve got it placed on. I couldn’t ride this bike at Cadwell with level one engaged, and by the time I got to Brunters, the Blade may as well have not had any tech, because I had it all switched off. The problem is that the systems are too intrusive, too aggressive and too much of a handbrake. The Blade does a great job of reminding you how far rider aids have come, especially when you compare its functions to that of its rivals. Anyway, you get the point, I wasn’t impressed.

The handling, on the otherhand, did tick my boxes. If you’ve ridden an SP, you’ll know just how quick and effortlessly they turn. The feel from the front wheel, supported by Öhlins electronic suspension, is next level and that really allows you to bury the bike into corners with some genuine gusto. Because the power’s not overwhelming, and the chassis is sublime, it also means you can get winding on the gas sooner and harder than on most equivalent sportsbikes.

That’s the real hook to the Honda, and the reason is was able to hold its own against the clock. It is an easy bike to ride, being very telling, very obedient and very stable. There were never any fireworks, or moments of clinging on to the ’bars as if my life depended on it.

The Honda just mopped up Bruntingthorpe’s rough roadway and helped me to power it to the fourth fastest lap on track. That did impress me, and so too did the improved front brakes. Sure enough, you could get the non-switchable ABS kicking in, but it seemed that bit more reserved than the package we knew on the ’18-spec bike.

The initial bite of the Brembos was strong and the feel they offered meant you could squeeze them all the way to the apex. I’m not able to say the revamped electronics have revolutionised this bike on track, but the brake benefits have certainly made the package a whole lot better. More power would be nice, and a little more wind protection.

This bike is small, relatively cramped and the swept ’bars do it no favours in the comfort department. But who cares about comfort when a fast lap is your primary concern? It’s all about the tenths, and Honda’s managed to lose a few in 2019. Good effort. More power next year, please.

Come back this time tomorrow to find out which bike came fifth in our countdown to find the Ultimate Sports Bike.