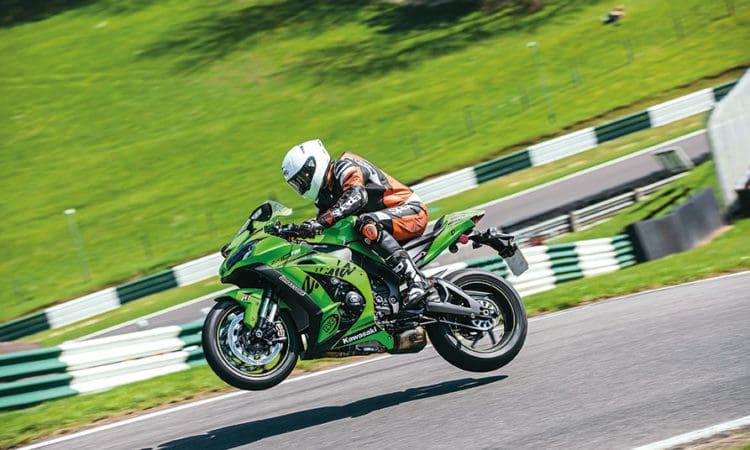 For a few years now, and despite an Irish bloke called Jonathan Rea annihilating the rest of the WSBK field for four years on the bounce, many folk have been a little uninspired by Kawasaki’s flagship superbike.

Not me, I think they are great. I raced one at BSB for years and took one to the Isle of Man TT so I’m fairly comfortable sat on a (slightly dated) green machine. I say that, but when an RR turned up for this test in its full Kawasaki green livery, a little bit of sick came up – it wasn’t loads, and I managed to swallow it back down without pulling too much of a face, but the acrid taste certainly outstayed its welcome. It’s a bit too green.

As soon as you sit on the Ten your eyes are subjected to yet another less than beautiful view – yes, the dashboard, which has adorned ZX-10s since 2011, is still making an appearance on this, the all-singing, all-dancing, fast as you like, £21,199 superbike.

Ok, it’s not identical. There are a few extra numbers and letters crammed into the small screen, but to all intents and purposes it is the same. Come on Kawasaki, it’s time for an upgrade, and not just for aesthetic reasons either; there is loads more going on, on the dash now, what with launch control, engine braking control and all that jazz.

You can tell the dash wasn’t originally designed for that info and it’s been shoehorned in, retrospectively. To counter my criticism, the Kwacker has one irrefutable quality in its corner; it’s actually a pretty comfortable experience.

It’s long and very spacious, and probably feels the least like a race bike, body-position-wise, of all the models in this test. That’s until you have a little bounce on it and realise how track orientated the stiffly sprung Showa suspension feels.

Fired up, the Ten’s lighter engine components made themselves known instantly (they have saved 408g on the con-rods alone) as the engine spun up with real urgency; I couldn’t wait to use all of the beast’s 14,800 revs. It took about three or four metres’ worth of riding to get acquainted with the Kawasaki, although it took a bit longer to get the thing up to the naughty end of the revs, such is the tallness of first gear – although this is something I was expecting (it was the same on last year’s ZX-10RR, and indeed the ZX-10R that I have just raced at the IOM TT).

It goes that fast in the bottom gear that you could quite easily leave the thing in first all the time on the road, but that wouldn’t give you the chance to play with the absolutely brilliant shifter and blipper, which comes standard on the RR. The ‘kill time’ has been reduced on this model to deal with the higher revs, the result seeing fantastically seamless upshifts, and faultless downshifts. On the subject of electronics, the traction and wheelie control systems do their job reasonably well, the wheelie control is a bit up and down, but the TC isn’t too restrictive for the road.

However, my favourite thing about them is how easy it is to turn them off. What fun I had on the ZX-10RR with the anti-wheelie kicked into touch! That’s not my favourite thing about the bike, though. That accolade has to go to the engine, or more specifically the revs available from it. It’s bonkers. I couldn’t tell if the engine was actually making any more power after 14,200rpm, which is where the old RR limiter came in (on our dyno run, peak power was at 13,641rpm), but to be able to make the thing sing like it did was just incredible.

The stiff suspension made bumpy roads a bit of a nightmare, but it came into its own in the fast, smoother stuff (the Marchesini wheels won’t have hurt here). You can tell it’s been set up for the race track, but in all fairness it wasn’t a bad road bike at all.

It had good table manners in town, being smooth and easy on the throttle pick-up, and steering the Ninja around at slower speeds was no hard work. Overall, I really liked the Kawasaki. Iit’s just a shame about that price tag.

I’ve never been a ZX-10 fan because they’ve always seemed so gangly and awkward to get up to speed, made worse by the motor’s top end focus, and the unnecessarily tall first gear. In my opinion, Kawasaki should have kitted the RR with a bit more grunt and a ’box ratio that actually makes sense, but they decided to give the Ninja more top end revs. Lord, give me strength.

That means it’s still pathetic at gassing out of bends, even if it has the legs to see off its rivals when it gets spinning. At the TT, that’d make perfect sense, but around Bruntingthorpe’s curvature, it was not ideal. The lack of grunt was very noticeable from the outset, with the only answer being to try and run the bike in lower gears to keep the revs aplenty.

But owing to the relentless surface changes and myriad of bumps, that made the big Kwacker feel awkward. It was constantly hunting on the throttle and tying itself in knots the minute I got on the gas. It was almost at the point of being un-ridable, so running a taller gear was necessary… even if the power felt flatter than a pancake that’d been ran over by a steam roller (twice). But then, once out of the bend, and halfway down the straight, all hell would let loose as this mad rush of energy came bursting through and would unsettle the bike in the process.

I don’t think the length of the stretch Kawasaki did it any favours, as it felt as though the front wheel was an eternity from me in the saddle. Through corners, the stiff Showa did a reasonable job of holding a good line and ticking off apexes, but it was on the straights where the Kawasaki tended to go whappy. I never had to throttle off, but on occasion I regretted not popping a few seasickness pills to help cope with its wayward wandering.

At the far end of the straights were the stopping points that turned out to be another hurdle for the big Ninja. I’ve always rated the bite and performance of the bike’s brakes, but the ABS was kicking in relentlessly and hampering the stopping times quite drastically.

That’s a shame because the blipper on this bike proved to be the best on test. It was so seamless, and I think the stock clutch is also worthy of strong praise. It mopped up the revs that got thrown at it with ease, keeping the rear end from wagging and meaning my only concern was with the leading wheel. I tried to adapt my style to trick the ABS, but it seemed a fruitless exercise.

The tech on the bike functioned well. The traction control was usable, and not too aggressive when it kicked in (on its lowest setting). The shifter was also next level, and as for the power options, there was no point in running anything other than the Full Monty.

What didn’t impress me was the crappy dash, that harks back to a time of flares and gold medallions. I’m sure it would’ve looked great down the local discotheque back in the 70s, but this is 2019, and the Ninja’s dash was by far the most crowded, confusing and retina burning, with its plethora of colours that relate to your revs. It was very distracting and very frustrating. On the whole, I expected more from the ZX-10RR.

I get what Kawasaki’s tried to achieve, but I’d sooner have a ZX-10R SE over one of these, because I know how much more stable the electronic suspension would have made the package. As for the engine, that’s still the big issue for me. I get that this is a race-focused motorcycle, borne out of multiple world championships, but decent low-down torque and usable gears aren’t too much to ask for, surely?

Come back this time tomorrow to find out which bike came fourth in our countdown to find the Ultimate Sports Bike.