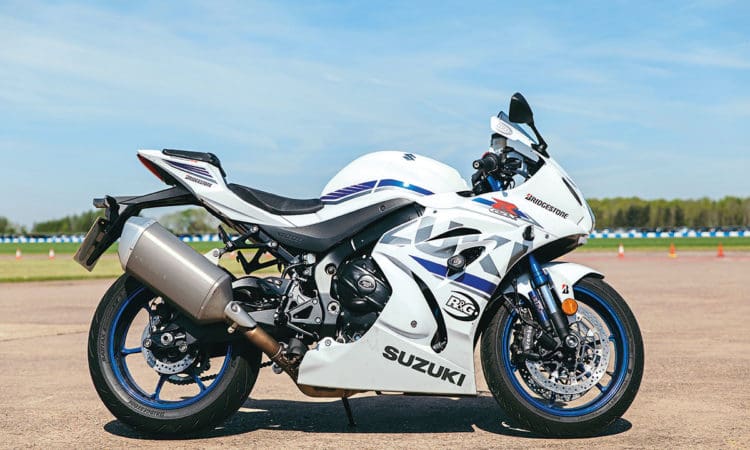 The white ‘L7’ Gixer might have divided opinions when it hit the showrooms in 2017, but I think it looks pretty rock and roll.

What doesn’t tend to divide opinions is the big fat exhaust can hanging off the side of the bike; it’s really not pretty, but I’m not going to bang on about that because you’ve already had to suffer a couple of years of me moaning about it.

Exhaust aside, I had fond memories of this bike, and when I jumped on it I was reunited with the reasons I grew to like this bike so much in the first place. It’s a bigger bike and more spacious than I remembered.

The fuel tank is wide and the windscreen high, so a slightly taller than average, slightly fatter than average rider like myself actually fits on the Gixer quite nicely – me and my gut felt perfectly at home on the big Suzuki (I’m sure that was a key consideration at the design stage).

I imagine if any space cadets were to jump on the Suzuki, they would physically recoil at the sight of the Nintendo Gameboy lookie-likie dashboard. There was an awful lot going on, on there, and I couldn’t make head nor tail of what it was telling me until I had a good sit down and dissected it bit by bit – it’s all there, but it’s all a bit messy.

That said, when I got going, my dashboard woes were very quickly forgotten. Indeed, all my woes were very quickly forgotten, first and foremost because of the engine. Being, as it is, an inline four with a normal configuration crankshaft (rather than the cross-plane jobby that’s in the R1M’s lump), you might expect bags of top end and a lacklustre midrange from the Gixer, but that’s not what’s on the cards.

I’ve done a fair few miles on this model already, but I was still amazed at the thing’s grunt. And it’s not just tuned for low end torque either; the midrange is strong, yes, but the thing just keeps pulling and pulling all the way to the red line.

The strong midrange and bananas top end makes for a really versatile bike on the road – it’s as fast as fudge when you want it to be, but you don’t have to be wringing its neck at the naughty end of the rev range to make it move.

When you are motoring on though, the tall screen really pays dividends to the comfort. I know it might not be a cool thing to talk about, but nobody likes having their head buffeted about for the sake of it. On the subject of comfort, after a decent stint in the saddle of the GSX-R, I found my derriere started to go a little numb (despite all the extra padding I’ve got), more so than it had on any of the other bikes.

The seat wasn’t particularly hard, so I can only put this numbness down to it being a bit flat and perhaps not as ergonomically shaped as it could be. But who cares about a numb arse when you’re blasting along and giving it the berries? Not me.

It’s easy to get carried away on the Gixer because it just does what you ask of it and never seems to get upset; wheelspins, wheelies, bumps in the roads and whopping crests were all chewed up and spat out by the Suzuki’s seemingly sublime chassis. The only component that threw in the towel early when you got cracking on were the brakes.

The ABS is too intrusive for even fast road riding, and it’s difficult to make accurate allowances for it as it’s pretty inconsistent, too. On such an amazing bike, the piss-poor ABS system really did let the side down.

In all honestly, though, it was still an amazing bike for the road. It’s a bike that you’d be quite happy to pop to the shops in town on, but one that’d also make you opt for the long way home. You’d have no bother keeping up with your mates, whatever they are on, and the more you push the Gixer on the road, the more it’ll reward you. You might want to look at an aftermarket can, though. Did I mention it’s massive?

The Suzuki’s a brilliant bike. I’m not saying it’s the best handling, the fastest down a straight or the smartest with its tech, but it’s consistently up the top end of every spectrum. It’s good at everything that it does, and it’s a doddle to ride.

Of course, I know this because I own one and I still rate the GSX-R as the best value for money sportsbike on the market. What’s the best bit about it? That’d have to be the engine. It’s a motor that seems to deliver at each end of the rev range, as well as in the middle. It packs so much grunt low down and as the revs increase, the horsepower majestically takes the torque’s place.

As standard, the fuelling isn’t ideal, with the stock throttle being a little too keen and harsh, but I know the difference a remap can make. Even so, it’s far from horrendous and I had no problem extracting the best of the motor on my assault around Bruntingthorpe. Being honest, I hoped the Suzuki would do well, but it’s no horsepower hero – my stocker is over 10bhp less than Boothy’s Kwacker (he needs all the help he can get). And Boothy’s stocker is comparably slower than the BMW, Aprilia and Ducati road bikes we dyno’d for this test… figure that?

In reality, loads of horsepower isn’t always necessary, or the glitziest of dashes (which is good news for Suzuki, because the GSX-R’s a bit of a minger). What matters is the usability of the package, and I don’t think there’s another bike out there that’s equally as accommodating or useable. Dash aside, the tech on this bike is limited, but actually pretty good.

The traction control is a system you can utilise, and it got well and truly leant on when banging in my hot laps. Unless you really take the piss and are facing a meteoric high-side, it never really hinders your ride, being a fluid, smooth engagement when weaned off to the lowest of settings. As ugly as the dash is, it’s easy to make out which gear you’re in and the smoothness of the shifter and blipper is another big tick in the hunt for tenths. The gearbox itself is faultless, being super smooth and dependable, and the stock clutch just seems to deal with whatever abuse you throw at it.

Of course, the Suzuki’s not perfect. The brakes do take a bit of getting used to. In reality, the ABS is way too intrusive, as Boothy discovered on the road, but if you treat them with respect, and progressively build in your pressure, you get the best out of them. They can be a little unpredictable though, and if I’d trusted in them as much as I wanted to, I dare say there’d of been another few tenths on the cards. Such is life.

One area that you really can’t complain about is the handling. The Suzuki’s planted, effortless to turn and really quite stable when you’re pinned out of corners. The frame is very telling and that proved a massive help when gunning in and out of corners. I felt I could sense everything that was going on through the plush, stock suspension. Being honest, I still can’t believe the Gixer clocked the times it did, but it banged in three laps within a tenth of its fastest on the bounce. That was impressive, as was the bike’s ground clearance and general comfort.

I didn’t feel cramped or achy after my session on track, which is a pretty big factor when you’re staring down the barrel of a full day on circuit. I just wish the brakes were better because this bike is awesome in every other way.

Come back this time tomorrow to find out which bike came third in our countdown to find the Ultimate Sports Bike.