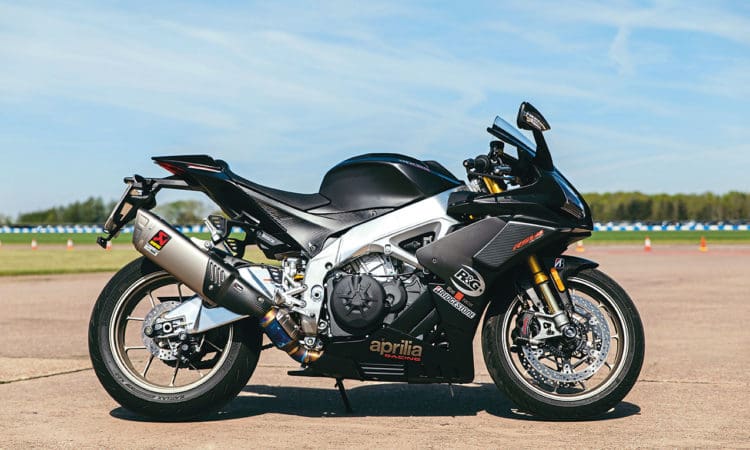 After the dominance of the Aprilia RSV4, in one guise or another, in FB tests of years gone by, we were all desperate to get hold of an RSV4 1100 Factory, the Italian manufacturer’s latest and greatest addition to their sportsbike arsenal.

Having had the opportunity to lap one of these monsters around Mugello at the launch last month I knew that the winged wonder would be in contention for the inaugural Ultimate Sports Bike crown, or at least as far as track riding was concerned – but how would it cut it on the road?

Like the 1,000cc version (which is still available to buy, but only in RR guise), the 1100 is brilliantly roomy whilst maintaining a sporty riding position, although it’s not a bike for a short-arse. You feel as though you are sitting ‘in’ the Aprilia which, to me, gives the rider a real feeling of being ‘at one’ with the bike.

The dash, which hasn’t changed in a few years now, is fairly pretty on the RSV4, but figuring out how to scroll through the settings and alter any of the electronics takes a bit of getting used to. There was a lot of scrolling around, and pressing, and holding before I got it to do what I wanted it to – it’s difficult to know which button does what… unless you read the manual (and who the hell does that?).

The added capacity makes no difference to the soundtrack of the Aprilia, which is a good thing, because it’s an engine note we’ve come to love over the years. From tick-over, especially when cold, the throttle seemed a tiny bit fluffy at the very bottom end when blipping the throttle; it didn’t seem to bark as menacingly as you might like it to, but once you get rolling it’s a whole different story.

The Aprilia’s V4 engine is just the gift that keeps on giving. The fluffiness at tick-over translated to a really usable throttle that did its best to help you get the most out of the claimed 214bhp engine, and when you open the taps, wherever you are in the rev range, you are treated to insatiable power all the way to the rev limit.. although you might be a little disappointed with the urgency of the motor around 4-5,000rpm.

Unlike a lot of manufacturers, Aprilia’s not kitted the bike on electronic suspension, but you do get fancy, adjustable Öhlins at either end, that are probably the smarter choice for last laps on track. That is assuming you’ve got a few tools to hand, which I didn’t on test. If I had, I’d of backed the damping off a bit for some of the roads I took it on; the chassis and the set up felt brilliant on the faster, smoother stretches, but when the going got rough, the Aprilia got a bit jittery. It actually turned really, really well, but didn’t seem to like the bumps.

The twisty Lincolnshire roads were also fantastic for highlighting how good the 1100’s brakes were. The Brembo Stylema callipers (which were reserved for the Ducati Panigale V4 family for a year), have got some serious stopping power and after a fair old bit of abuse and countless stoppies, there was never any brake fade to speak of. And as for bite, they were up there with a rabid Pitbull.

“The Aprilia is effortlessly precise on track.”

It might seem a little trivial, but when you are hanging the bag out and doing some fast road riding, the shape of the fuel tank quickly becomes a bit of a pain. The corners of it are too sharp, and when you hang off the side of the bike to throw it round the bends, the corners dig uncomfortably into your inner thighs. The same phenomenon happens when doing stand-up wheelies, too. Not that we would ever do that on the road (well, Carl can’t, for starters).

On the subject of wheelies, they are made a whole lot easier by the brilliant shifter on the RSV4. In fact, the whole shifter/blipper combo on the bike is brilliant, and handily lets you perform full throttle downshifts, which might not be very good for the gearbox, but it’s good when you suddenly decide to open the throttle, drop it down a cog or two and overtake that line of cars that’s been holding you up all the way to work.

It’s difficult to give the Factory any real criticism. Its few faults are not only minor, but fairly arbitrary anyway. I’ll stand by what I said in issue 353. I think the Aprilia RSV4 1100 Factory is the best production bike I have ever ridden. I’m not saying it’s the most comfortable or practical on the roads, but sometimes performance matters more than piles, doesn’t it?

There aren’t many street bikes that’ll rock up at Cadwell and clock a 1m 37.1 on their first flying lap. Don’t get me wrong, I had high hopes for this bike, but those kind of times, on a trackday, on fast road tyres, are pretty exceptional. More to the point, this bike is exceptional.

I clicked with it straight away, grasping instantly the brilliance Boothy had been banging on about since returning from the model’s launch at Mugello. What makes it so good? To be honest, the entire package. The frame is so telling, so agile and so stable, allowing you to capitalise on the top-draw Öhlins that just seem to eat up apexes.

The Aprilia is effortlessly precise on track and the engine works hand-in-hand with the running gear to help you in, through and out of bends. I couldn’t actually tell a big difference between the poke of the previous iteration RSV4 and this one right here, because the delivery of power is so smooth and delectable that it doesn’t intimidate you in the slightest. If you want to go quicker, you just wind the throttle and can depend on the V4 to punch you out of bends with plenty of punch, but none of the melodramatics that you get on Ducati’s Panigale V4S.

The only area I felt slightly disappointed was in the lower rev-range, sub-7,000rpm, because the pick-up of the motor seemed to take forever. It’s probably a good thing because with a genuine 20+bhp on tap, you could otherwise find yourself in big trouble very quickly.

Other plus points include the seamless electronics, including a class-act blipper and shifter. I like how customisable and plentiful the tech on this bike is, and I like the simplicity of the paddle shifters for the traction control system. At Cadwell I got on better with zero traction switched on, but at Bruntingthorpe, because of the abundance of overbanding, lumps and bumps, I had the most minimal support engaged. It didn’t hold me back too much, but just gave me the peace of mind to wang open the throttle as and when I needed it.

This bike didn’t feel massively fast down the straights, but the drive out of bends felt next level, and that same accolade could be said for corner entry. The feel from the front wheel was exceptional, dependable and inspired me to go big-balls into corners, knowing that I was in safe hands. The other element I became a fan of very quickly was the braking on the bike. The Brembos felt sharp to the touch, but could be trailed deep into corners, because they offered so much feel.

I wasn’t surprised this bike clocked the fastest lap time; I was surprised with the lack of effort required to do so. It was 2009 when Aprilia first introduced this RSV4’s frame, but it’s still far from broken.

Styling-wise, the package hasn’t moved on substantially since (assuming you can avert your eyes from those MASSIVE wings), but who cares about image when you’ve got a bike that ticks all the boxes in the pursuit of fast laps. It really is very hard to criticise the 1100 Factory.