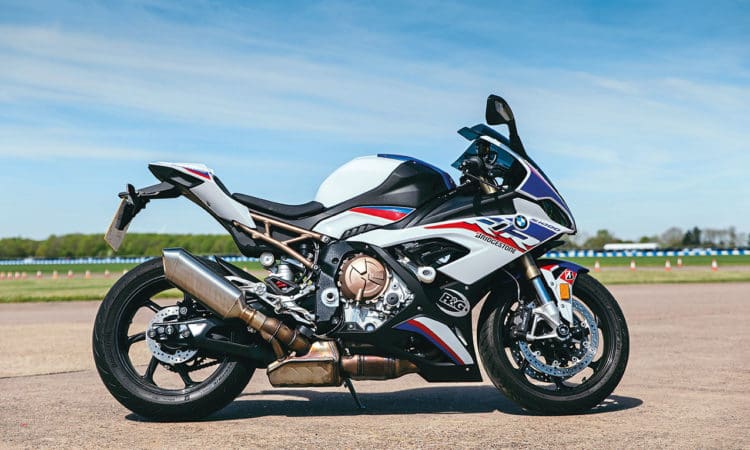 I could not wait to take the new Beemer for a spin. The old one was always a proper weapon on the road, and if the hype surrounding the new model was anything to go by, it was to be even faster, even lighter and even smarter.

The new S Thou’ certainly looks smarter than the old one, and I’m pleased to see that BMW have dropped the asymmetric headlights, which as far as I could see resembled nothing but a stroke victim – you could tell the design team held form in much lower regard to function.

Not this one, though. Not only does the Bimmer look the part, it feels the part, too; it’s comfortable and spacious. The seat isn’t the softest, but it’s just the right shape and cossets your backside delightfully.

The tank seems really sizable when you are on board (despite it being only 16.5 litres), but the back of it is shaped perfectly for your legs. Everything is comfortable, and you can tell the Germans, in typical German style, have put a lot of thought into the ergonomics of this particular Bahnstormer.

That said, turning the key wasn’t the most pleasurable of experiences; the ignition had a really stiff, plastic-feeling action, almost as though there was something stopping the key from turning in the ignition barrel. It was a strange one, but once you get past such minor details, your eyes are treated to a seriously smart-looking dash.

There is plenty of info on there, but it’s organised really well. The new RR comes with BMW’s multi-control wheel on the left-hand switch gear, which is a brilliant way to easily scroll through the modes and settings. The user interface on the Beemer is probably one of the easiest and most user-friendly going. In all honesty the left switch gear does look a bit clumpy for a sportsbike, but with so much electronic stuff to play with, it kind of needs to be.

Cruise control, traction control and the heated grips (yep, heated grips) have all got their own separate buttons, as well as all the menu toggles and standard light switches, so I think ‘clumpy’ switchgears can be forgiven.

The new motor utilises BMW’s own Shift-Cam Technology, which has been brought over from the dark side (BMW also make four-wheeled vehicles, in case you didn’t know), to maximise the power and torque that the engine can make. I’ll be honest, I was trying my best to be able to feel the point at which the cams ‘shifted’, but I couldn’t.

Not only was the power strong, it was seamless. In fact, that power is so linear that you could almost be persuaded that you are nailing an electric motor rather than a conventional, inline four cylinder, internal combustion engine – well, if it wasn’t making such a raucous noise, which it most certainly does, when it’s hurtling towards its 14,600rpm rev limit.

Unfortunately, at the big boy’s end of the revs, there were a lot of vibrations coming through the ’bars, which did become rather annoying. Luckily, on the S1000RR, cruise control could be initiated, meaning I could let go of the ’bars every now and then to let the feeling return to my fingertips.

Once I’d manned up and stopped worrying about my digits, I started really enjoying how good the Beemer was on the road. For the majority of the time on my road ride, I had it set in ‘Dynamic’ mode (there is Rain, Road, Dynamic and Sport, plus three ‘Pro’ modes on the M-Sport) and the whole electronics package felt sublime.

There were some instances where the traction control kicked in, but it was never so much that it ruined the party, and the throttle connection was as sweet as cherry pie. The ABS was only ever bothered when trying to do stoppies; the electronic suspension made setting the bike up for different road conditions a doddle; and the shifter and blipper worked perfectly, every time.

“No other bike in the test could smash through chicanes like the RR.”

The M-Sport might be £19,315 but my goodness gracious me, it is one hell of a good road bike and undoubtedly the best value for money when paired against its rivals on a similar, or greater, pricing.

I felt so cheated on the rain-rife launch of BMW’s new S1000RR, and so was consequently gagging to get the Beemer out on track in dry conditions. Even in the wet the RR had excited me, showcasing the rudimentary DNA of a well-honed, track-inclined assassin, so I expected it to do well on USB, and it did.

But was it the dream bike I envisaged it to be? Yes and no.

The thing I didn’t like about it, especially at Bruntingthorpe, was how susceptible it was to weaving out of corners. If I didn’t know better, I’d have thought I was back on the Ducati. In reality, that was probably a set up issue, as the bike hadn’t displayed such an erratic disposition at Cadwell Park, where it devoured Lincolnshire’s finest race track with ease.

That’s where I grasped initially just how easy it is to acclimatise yourself with the Bavarian bruiser, which makes riding fast pretty damn easy. The poke of the motor is both plentiful and noticeable, being much more supportive lower down than the old one used to be. But the best thing about this latest iteration’s lump is that it gives you performance at both spectrums of the rev range.

Apparently that’s down to the Shiftcam tech, but I’m beginning to think that’s just a myth because I could not tell in the slightest when the system kicked in.

This bike made 206bhp at the rear wheel on our dyno, which surprised us all… before we’d ridden it. The urgency of the motor is quite dramatic and the way it allows you to rev it so high, before the barking limiter kicks into life, is really quite satisfying. The throttle connection on the Beemer is brilliant, being very precise and manageable.

This RR has a ridiculous amount of rider tech to help you get around a bend, but I felt quite happy with everything switched off, feeling my way around a track and learning the potency of this package without higher intervention stopping me from having fun. As obliging as the BMW is, it will bite you on the arse if you give it half a chance.

The extra torque at the bottom takes a bit of getting used too, so I maybe didn’t find the RR quite as easy to click with as I did the previous iteration, until I’d got a good few laps under my belt. The thing is, as whappy and aggressive as the power delivery can be, the combination of top-quality electronic suspension and a really telling frame, means you’re able to feel the BMW’s displeasure before it gets too loose. I like that. I’d be more disappointed if the bike was too easy to ride, or duller, because then you wouldn’t feel so alive.

The other thing that really impressed me was the speed at which the bike changes direction. It’s ridiculous! The M-Sport is a pretty light sportsbike, but I’m convinced it’s the carbon fibre wheels that give it the edge in the cornering department. No other bike in the test could smash through chicanes like the RR, effortlessly flopping from one side to the other.

The brakes also blew me away, being massively good in the anchorage department. I never felt the ABS once, but I did feel a strong bite and consistent feel through the BMW’s radial mastercylinder. The slipper and blipper felt good, but I wish there was a bit more sensation on the downshifts.

As for the rest of the tech, it’d take a lifetime to get my head around all of it, but the systems I was playing with were a doddle to operate, with alterations clearly showcased on the fancy new dash (at long last!). BMW’s built a corker of a bike, here.

It’s one I really want to get more acquainted with, on road and track, where it proved on USB to make riding a real pleasure in both environments. It’s a lot of money, but it’s also a lot of bike.