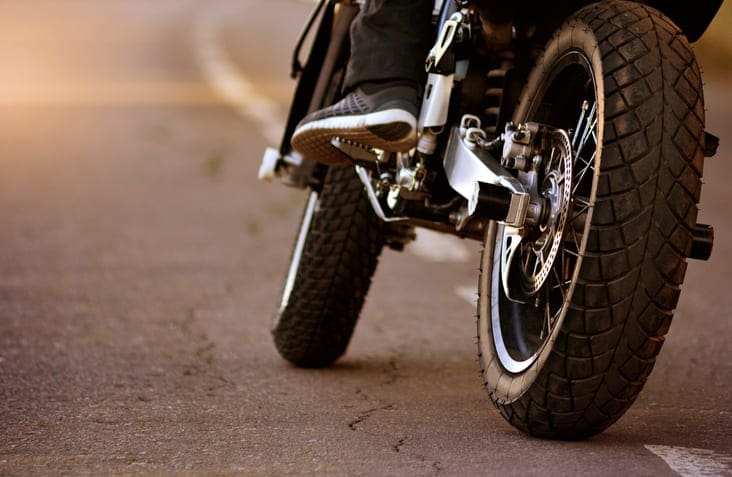 Our specialist motoring solicitor Andrew Prendergast is back to guide you through motorcycle legal trials and insurance troubles.

Q: I got spanked off my GSXR1000 by a van as I was filtering through traffic. I broke my femur and pelvis. As I was getting scooped up by the ambulance, the Old Bill said they would get the bike recovered. Two operations later and some metalwork inserted and I’m home, only to find an invoice for the bike recovery and storage. I’ve tried to get hold of the copper’s boss as he should have told me there was a charge. I’ve also asked my insurer to sort it, but they reckon it’s nothing to do with them as I’m only insured third party, fire and theft! Do you think I’ve got a leg to stand on?

A: I’m afraid you ‘haven’t got a leg to stand on’ (no pun intended) with the Police or your insurer. Starting with the policeman, he has the power to remove a motorbike (or any other vehicle for that matter) that has been left or parked illegally, obstructively or dangerously, or that has been abandoned or broken down, etc.

So, if your poor old bike is in bits, Mr Plod can legally have it removed to make the road safe for everyone else to use. As for the charges, over the years, governments have repeatedly taken the view these costs should not be paid out of the ‘public purse’. The charges are detailed in Removal, Storage and Disposal of Vehicles (Prescribed Sums and Charges) Regulations 2008. For bikes, the removal fee is £150 and storage is £10 per day.

Whilst I know insurers don’t generally like to pay out, yours are correct on this occasion. You only paid to cover your bike if it caught fire or was stolen. My advice is pay the fees before the recovery company threaten to dispose of the bike (which they can) and then look to claim these back from whoever spanked you off.

Q: The plan had been a romantic weekend with my fella. I booked us into a pub in the Lake District. We rocked up to the place and went to park up near the kitchen door on the side of the property, out of sight of the road. That’s about all I remember for half-an-hour. It turns out that as I was parking my BMW F800, my front wheel slipped on used cooking oil which had leaked from a big drum by the kitchen door. I fell over and hit my head on a metal bin.

Apparently, I was knocked out for a few minutes and when I came round I was mumbling for a while. The owners called an ambulance and off I went. Thankfully, I had no brain damage, but I have been diagnosed with post-concussion syndrome and I have had a seriously ‘foggy’ head for about two months and been off work with headaches. Whilst the pub landlord was nice at the time and offered us a free meal when we next stayed, he has said I shouldn’t have parked near the kitchen door and that he’s not liable because it didn’t happen inside the pub.

A: You went to park in his car park and fell off on cooking oil that leaked from a drum he had stored there. This is a classic ‘occupiers’ liability’ case. In short, the pub owner is an ‘occupier of land’ and owes you a duty of care as a visitor. As per the Occupiers’ Liability Act 1957, he has a ‘…duty to take such care as in all the circumstances of the case is reasonable to see that the visitor will be reasonably safe in using the premises for the purposes for which he is invited or permitted by the occupier to be there.’

Therefore, he is liable for the accident and injury caused by the oil that has leaked from the big drum. My advice, get yourself a solicitor and go down the formal route.

The MoreBikes legal column is compiled by managing partner Andrew ‘Chef’ Prendergast and his bike-riding barristers and solicitors at White Dalton Motorcycle Solicitors.

The firm deals with personal injury claims and its sister company, Motor Defence Solicitors, deals with all the motoring offences. White Dalton lawyers have a vast knowledge of bike law, and they have full bike licences, too. They don’t act for insurance companies or the prosecution. White Dalton is Britain’s premier specialist motorcycle law practice, and if its professionals don’t know the answer to your question, there probably isn’t one. Don’t rely on the advice from your insurance-appointed solicitor, get proper independent advice.