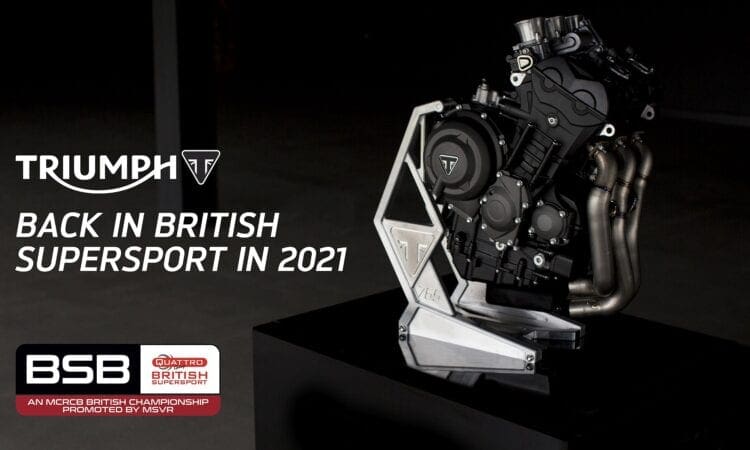 Triumph and PTR pair up for their 2020 British Supersport title attack. But what does it all mean?

We aren’t sure about you lot, but we got pretty bloody excited when Triumph let out the news that the official factory were going to make a return to national level racing. Short of a new, non-limited Daytona, it’s probably some of the coolest news that could’ve come out of Hinckley since their Moto2 expedition.

So how are they doing it, and is it a good move? Well we caught up with Stuart Higgs (British Superbike Series Director/head honcho), alongside Triumph’s man in the know (and Product Officer) Steve Sargent to find out, and we’re glad to report that it’s all good news.

The general gist is, that the PTR squad will be running a factory-backed effort, using a bike based on a Street Triple RS that has been turned into a production style machine – almost like what’s allowed in the No Limits Triumph Championship (think Daytona shell, clip-ons, rearsets, etc).

With a fairly hefty run up into round one next year, there’s loads of time to test the bike and get some proper back-to-back on data against the conventional machines, which means that everything should be fairly equal; but they’ll be kept that way, through concessions in order to make Supersport racing, well, great again.

That this is not only ground-breaking in terms of jigging up classes, but actually welcomed on both a national and international level (so both British Supersport and World Supersport), which is a rarity considering how different the championships are run. So if all goes well, expect to see an official Triumph squad taking on the World scene in a couple of years, and even better, at least one more manufacturer dabbling in the British Supersport grids next season… and yes, it’s Italian.

The full feature with in-depth analysis and interviews will be in next month’s mag, but until then, it’s all looking, well, epic. We can’t wait to hear a heap of those 765cc Triples screaming their guts out already…