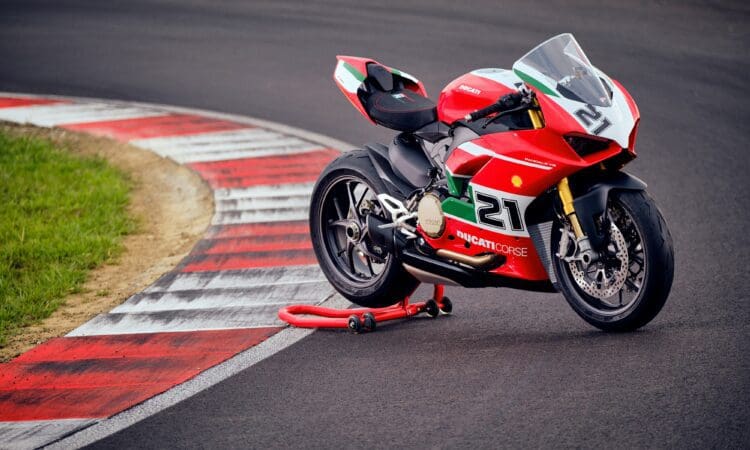 Is it really 20 years ago? It surely is. Two decades since top race god and awesome Aussie bloke Troy Bayliss snatched his first WSBK title off champion Colin Edwards, on the factory Ducati 996 R F01. And the guys at Bologna aren’t the sort of folk to let that pass without some sort of celebration.

Enter the Ducati Panigale V2 Bayliss 1st Championship 20th Anniversary. The name is a mouthful, but the bike itself is properly sweet. It’s based on the 155bhp 955cc Superquadro-powered Panigale V2 – so probably has a little bit more power than the WSBK race bike Troy used in 2001. Stock power for a 2001 996R was a claimed 136bhp, and even with new crankcases every race (!) and a tune from the factory gods, you weren’t getting much more than 150bhp peak power (the Ducati website itself says 144bhp…)

The changes are chassis and cosmetics though – there’s Ohlins suspension all round, with NX30 forks and TTX36 shock, plus the sweet retro-race-rep paint job incorporating Troy’s autograph. There’s a lithium battery and single seat unit, which helps save 3kg over stock, and the seat itself is a lush embroidered design.

Best bit is probably the price though. At £17,995, it’s a positive bargain for a factory limited edition special Ducati, and we reckon a load of folk will be interested. It’s in dealers in October, more info on the Ducati website: www.ducati.com