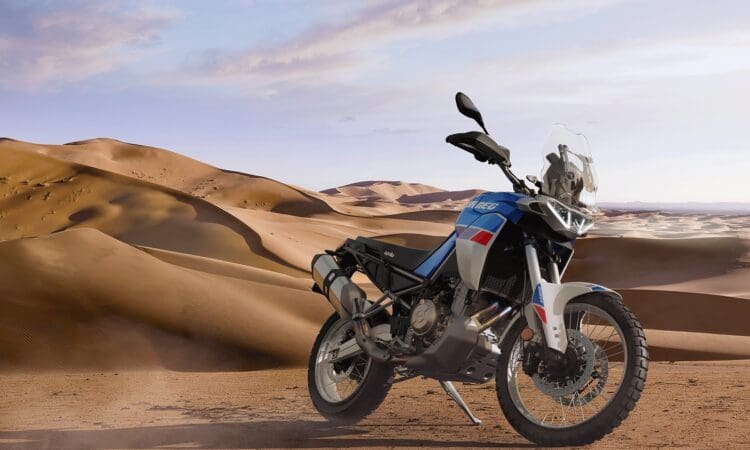 The original Tuareg is, of course, the doughty breed of North African Berbers, who carve out a living in the perilously harsh conditions of the Sahara desert. Historically nomadic, they still live a lifestyle that is diametrically opposed to the sedentary tech-heavy fast-food-fuelled existence of most of us in ‘developed’ societies. And we know where that is heading.

Anyway – the next Tuareg in our mind is the tasty Aprilia Tuareg 600 of 1988, which lived in a box marked ‘big traillies’ when I were a lad. These were niche, hipster-ish devices, poo-pooed by most Brit bikers in favour of GPZ900Rs, ZXR750s, GSX-Rs and the like, but much more popular in mainland Europe. Here, the Tuareg 600 sold against the likes of Kawasaki’s KLR600 and Honda’s NX650 Dominator, and offered an aggressively-styled Paris-Dakar race-rep look, married to a slightly wheezy 582cc air-cooled single cylinder motor built with Rotax.

The Aprilia Tuareg disappeared in 1992, but now, nearly 30 years later, it’s back, with a version of the Noale firm’s RS660 supertwin engine, more sophisticated styling and a heap of electronic technology; all ready to do battle in the current white-hot middleweight adventure class. It’s up against some strong machinery – Yamaha’s excellent Tenere 700, the KTM 890 Adventure and BMW’s F750/850 GS – but on paper it looks strong.

The RS engine has been retuned to make 80bhp and 70Nm, so there’s lots more low- and mid-range grunt, while dry weight is decent at 187kg. Frame is a composite steel tube/aluminium cast unit and the suspension is standard offroad stuff: 43mm USD forks, monoshock rear, Brembo dirt-friendly brakes.