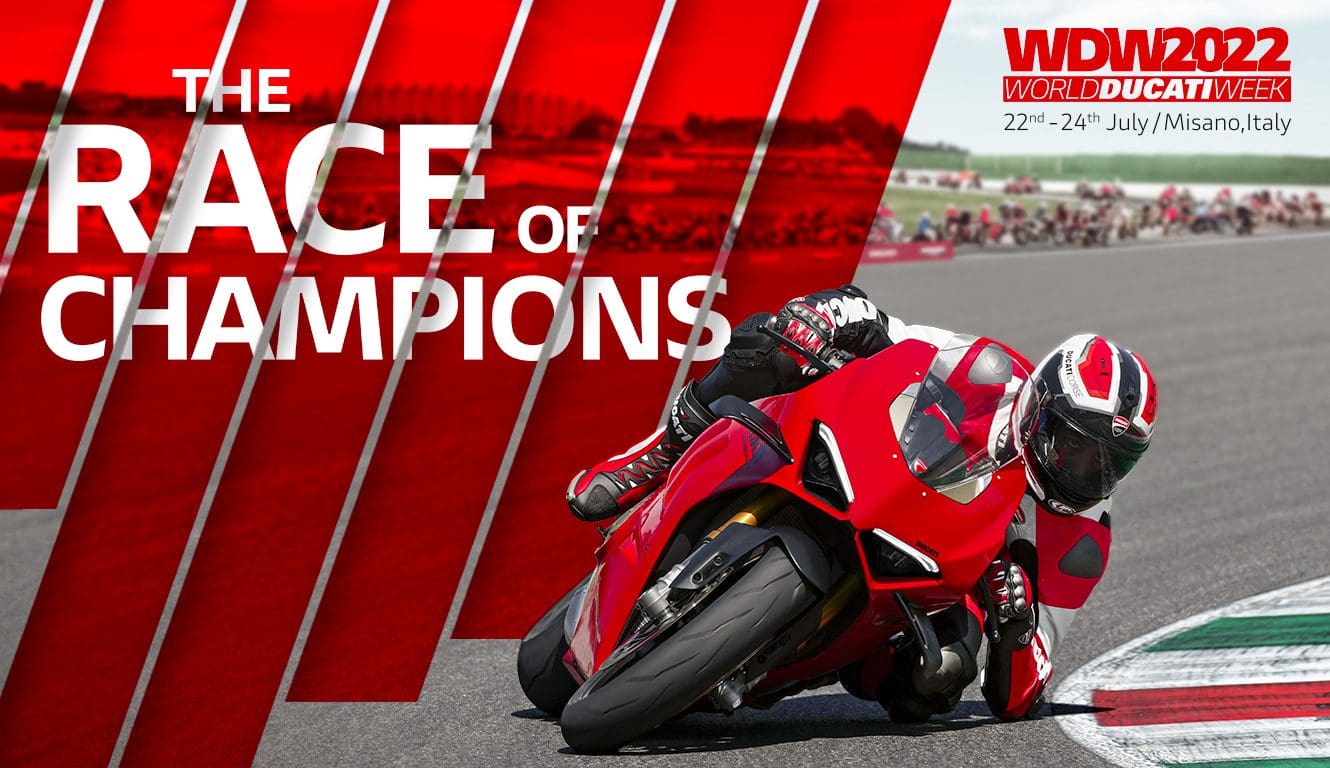 After the Sunday that saw Ducati triumph in the Italian Grand Prix at the Mugello International Circuit, the Bologna-based motorcycle manufacturer announces the details of one of the most highly-anticipated moments of World Ducati Week 2022: the Race of Champions.

The race that will ignite the passion of fans and enthusiasts of two wheels and unite the community in the name of “Let’s Ride as One” will see 21 Ducati riders from MotoGP, Superbike and Supersport competing on the track on Saturday 23 July. Many of them have won world titles in various classes and races in the European and Italian championships.

Pecco Bagnaia, Jack Miller, Michele Pirro, Johann Zarco, Jorge Martin, Enea Bastianini, Fabio Di Giannantonio, Luca Marini, Marco Bezzecchi, Alvaro Bautista, Michael Ruben Rinaldi and Danilo Petrucci are just some of the champions who will compete on the Misano track, together with other Ducati riders present in the Superbike and Supersport championships, including Oliver Bayliss, son of the legendary Troy.

The Ducati heroes will fight it out on Panigale V4 S and Panigale V2 bikes in racing configuration, each one customized by an exclusive livery inspired by the graphics of the bike used by the rider during the championships. All the bikes will be equipped with the best Ducati Performance accessories for the track, such as Akrapovič titanium exhausts, Pirelli slick tyres and Rizoma brake lever protector. While the engines will be equipped with the only oil certified by the Ducati Research and Development Department, Shell Advance Ducati 15W 50.

It will be a unique competition: a dual category race with two winners . The Panigale V4 will be lined up in front of the Panigale V2 and the riders will compete in 12 laps of the track with free practice, qualifying and warm-up, with times certified by Locman, Official Timing Partner of the race. An unforgettable spectacle that only Ducati can offer, and which represents one more reason to participate in WDW2022.

Another unmissable appointment of the World Ducati Week is the lap of honour with all the riders present at the event, including the historic ones who have taken the red bikes of Borgo Panigale to victory on circuits all over the world and who have maintained a strong bond with the Ducatisti, their great fans. On Friday 22 July Carl Fogarty, Troy Bayliss, Chaz Davies, Régis Laconi and Rubén Xaus will join the Race of Champions riders to lap around the track, celebrating the pride of being Ducatisti.

On Friday 22 July there will be the track moment par excellence, which sees all the Ducatisti and their Ducati bikes as protagonists: the parade! Starting from a lap of the circuit, the colourful snake of motorcycles will take thousands of fans to Riccione for the evening program of the World Ducati Week, which will shortly be announced.

Tickets to not miss a moment of the eleventh edition of the WDW tickets are already on sale. Different entry formulas are available for those who participate on a motorbike or as a passenger, for one day or all three days. To discover all the options, just visit the dedicated section on the Ducati website.

New events and international guests will be announced in the coming weeks, completing the three-day programme. All the news will be available on the dedicated website, on the brand’s social media channels and on the official Facebook page of the World Ducati Week.