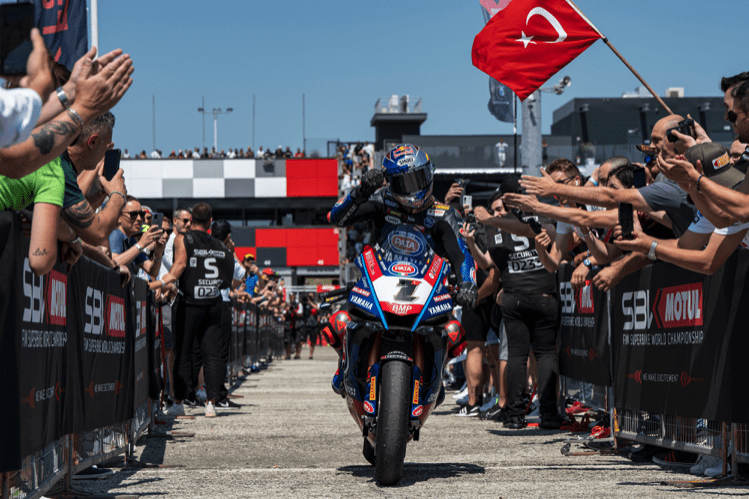 The Turkish ace followed this spectacular performance with a very strong second place in Race 2 after a fierce early battle with Alvaro Bautista (Ducati). Teammate Andrea Locatelli pushed hard to record two top six results in the hottest of conditions this season so far.

In the Superpole Race this morning, the team’s defending champion Razgatlıoğlu only gave Kawasaki’s Jonathan Rea a brief look at a clear track at the end of lap one, before putting on a dominant display to win in front of the passionate Italian fans with a relentless run of sub-1’34 lap times – setting a new race lap record in the process (1’33.722).

During the opening laps of Race 2, Razgatlıoğlu made a strong challenge for the race win, making some aggressive and opportunistic passes, before settling for a strategic second place to bring home 20 very crucial championship points.

“Loka” fought hard in both races to maximise his results at home, and in front of his enthusiastic fan club, but was unable to improve on P6 in all three races. In Race 2, he showed grit and determination to fight back from some early mistakes and continue his consistent run of results, finishing within the top six for the ninth-straight race in a row.

WorldSBK now has a four-week break before Pata Yamaha with Brixx WorldSBK’s home round at Donington Park in the UK from 15-17 July.