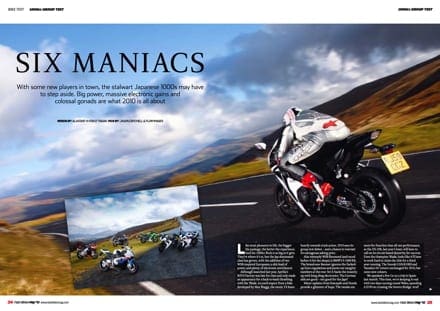 Looking to buy one of the 2010 superbikes on the secondhand market? This is what we said about them in our 1000cc group test when they were new…

“Like most pleasures in life, the bigger heavily towards track action. 2010 sees its more for function than all-out performance, the package, the better the experience. And the 1000cc flock is as big as it gets. They’re where it’s at, but the Jap-dominated class has grown, with the addition of two WSB-inspired Europeans, a shit-load of power, and plenty of electronic enrichment. Although launched last year, Aprilia’s RSV4 Factory was late for class and only made an appearance for a back-to-back thrashing with the ’Blade. As you’d expect from a bike developed by Max Biaggi, the exotic V4 leans group test debut – and a chance to warrant its outrageous asking price.

“Also intensely WSB flavoured (and raced before it hit the shops) is BMW’s S 1000 RR. The brand-new Beemer ignores the fucked- up Euro regulations and punts out naughty numbers at the rear. Yet it backs the insanity up with king-ding electronics. The German aids are good – too good for the Japs? Minor updates from Kawasaki and Honda provide a glimmer of hope. The tweaks are so the ZX-10R, last year’s loser, will have to call on its circuit-based dexterity for success. Even the champion ’Blade, looks like it’ll have to work hard to claim the title for a third year running. The Suzuki GSX-R1000 and Yamaha’s R1 return unchanged for 2010, bar some new colours.”