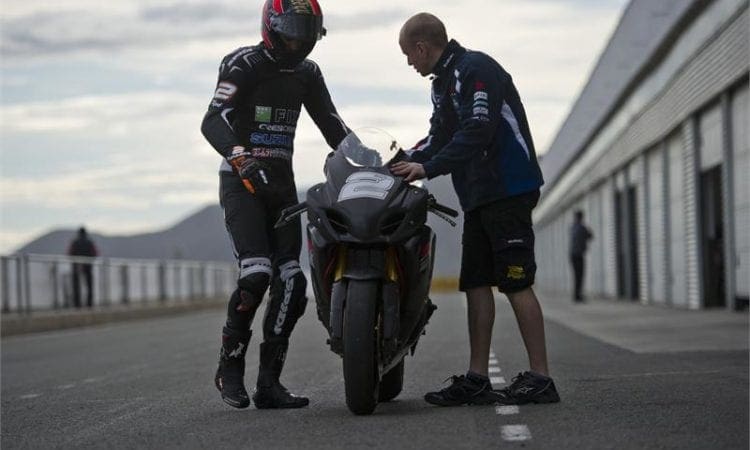 The last part of the 2012 WSB season looked promising for Leon Camier and the FIXI Crescent Suzuki team. The Andorra resident struggled with top-speed for most of the year, but now Yoshimura have a new spec motor for 2013 and Camier has a new team-mate with Frenchman, Jules Cluzel, stepping up to Superbike.

The British-based squad battled high winds at Almeria circuit in Spain, but Camier completed most of his test program and got the chance to sample the 2013-spec motor. Due to the winds, Leon wasn’t able to fully evaluate Yoshi’s latest work. The team now head to Jerez for a two-day test and join Pata Honda, BMW Italia and Ducati for more laps.

Leon Camier – “The weather today was awful; because it was so windy it made it difficult to do anything really meaningful. We managed to get a few jobs done and although we tried the new-spec engine, we couldn’t really understand the differences because of the conditions. I am now looking forward to Jerez and carrying on from the progress we have made here during these two days and trying out the 2013 engine properly.”

After a year with PTR Honda and winning races in World Supersport, former GP rider Jules Cluzel impressed on his second outing onboard the GSX-R 1000. Despite the weather, Cluzel continued to adapt to Superbike power and got quicker throughout the test. A crash put a ‘small hole’ in his arm but will be fit for the Jerez test.

Jules Cluzel – “I really enjoyed myself today, because I felt so much better on the bike than I did yesterday. I know I improved my lap-times and am not so far away now, so I am pleased with that on only my second day on the FIXI Crescent Suzuki GSX-R. The wind was really strong this afternoon and I had a little crash. I don’t know what happened really, it was a bit of a surprise so it might have been the wind. I am ok – just a small hole in my arm – but I’ll be all right for next week. We are going to Jerez now and I know the track well, so I think I’ll be able to go a bit quicker and get closer to the fastest riders.”

Not long now until the first round at Phillip Island!