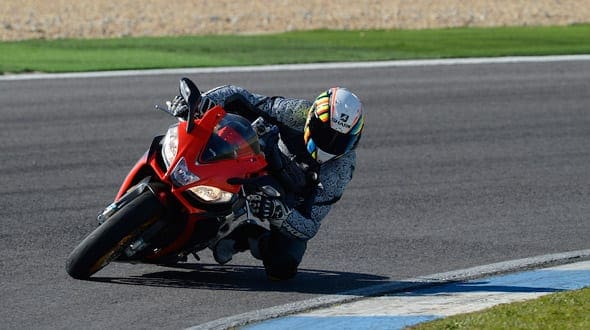 As the title suggests, the two-time Fast Bikes’ Sportsbike of the Year gets ABS for 2013. But there’s more to the updated RSV4’s arsenal than meets the eye.

We’ve just returned from the press launch at Estoril, where both the more basic R model and the Gucci Factory derivative were available to thrash on the GP circuit. By reducing internal friction, and looking after casing ventilation, the RSV’s delicious V4 engine gets another 4bhp. It doesn’t sound a lot, but you can feel the extra go-go – it gobbled up Estoril’s sixth-gear start/finish straight in warp speed fashion.

The multi-function ABS, weighing just 2kg, is Bosch’s new 9MP unit. Not only does it stop your wheels locking up, the race-spec ABS also has an anti-lift policy, controlling the rear’s action under heavy braking. Clever stuff, eh? New Brembo M340 Monoblocs are also additions for 2013.

While handling and stability improvements weren’t on our priority list, the chassis changes come via small 5mm adjustments. The engine is lowered 5mm, as is the swingarm pivot to aid braking control. The RSV4’s love for guzzling gas has also been catered for, with another 1.5 litres added to the fuel capacity. The now 18.5L tank has been sculptured to offer better ergonomics during braking.

While the Factory model revels in Öhlins and a multi-adjustable chassis, the Sachs suspension-shod R model should still be a serious consideration – that’s if you’ve got £14k-ish to splash on exotica. We’ll give you prices when we get them…Read the full review in the upcoming issue of Fast Bikes, out on 1/3/13