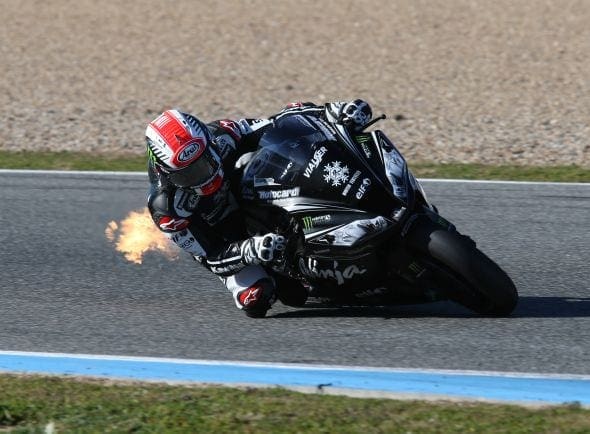 European testing for WSB 2015 is over, and now the grid packs up and heads out for their final test in Australia, before the opening round at Phillip Island. Well, all but Troy Corser’s BMW squad including Toni Elias and Ayrton Badavini who will join the circus in Europe. Anyway, here’s a lovely selection of testing action images by the legendary Kel Edge.

Yes, we all got a little excited to see Max Biaggi on track, but sadly he was just testing electronics for Aprilia’s MotoGP effort, falling off in the process. More work needed there, then… Hopefully they’re not just pouring upwards of 150-million Euros down the GP drain there, over the next three years. Be nice to see Max do a one-off WSB round sometime though.

Niccolo Canepa, in a surprise move, joined EBR. He has got something to prove, too, after a career that didn’t hit the heights expected of him. Could be a regular points scorer, which for EBR would mark a decent improvement. Got the wheelies down pat by the looks of things, mind you!

What will Randy de Puniet do this year on the Suzuki? The answer is, who knows! He’ll go well in Oz we’ve no doubt, but the rest of the year is a mystery. He should be onboard for Suzuki’s new bike in 2016, though…

Old ‘Gasper’ Guigliano is super fast over a single lap on the Ducati Panigale, probably because he can get back to the pits quicker for a sneaky bifter! But can he put it all together this year, or stop crashing his brains out? Hopefully yes, but then, hopefully not in front of team-mate Chaz Davies. C’mon Boyo!

This could be a big year for Leon Haslam, blighted over the last couple of seasons by injury. Word is the Aprilia is still the shizz though, despite the new restrictions.

Alex Lowes in his second year, will be hoping for a few less bruises in in 2015. All he needs do is show up his superstar team-mate, and all will be well.

Larry Pegram jumps on the EBR, a bike he’s already familiar with. Only time will tell if the new rules will help this fellow at all, he’ll have his hands full learning all the tracks and rather a lot of fast competition to contend with.

Mr J Rea – After the first test we all thought he may have made a mistake moving to Kawasaki, but Big Green seems to have pulled out the stops and the ZX-10R is fast once more. Can’t blame him for leaving Honda really, but his future is now entwined with WSB. For sure, he’s a contender this season.

Poor old Tom Sykes, so close but so far last year, and this season sees a new team-mate who doesn’t love him much more than his last one did, we hear. Can the Grinner overcome all? Never lose faith in an ex champ’ as he’s got the grit and cojones to take it back again.

Now then, the first of two potential dark horses this year. Were Jordi Torres on any other bike we may not think as such, but he’s been very fast on the RSV4 so far. Could be a podium contender if he learns the tyres quickly. Our money’s still on Leon though.

Mr M van der Mark, boy are we excited to see you doing your thing on the Ten Kate Fireblade. There’s little more entertaining than giving a youngster 200bhp and seeing what happens. Expect fireworks from this boy, even if his team-mate is the current champion. Speaking of Sylvain Guintoli, he has a hurty neck after an early crash in testing, but should be gravy for the first race.

One last thing, despite the restrictions and reduction in power, it seems like they’re going to be even quicker in 2105 if the tests are anything to go by. Guigliano’s testing time would have easily seen him in the top ten of MotoGP’s qualifying last year, and he set that in winter…

Right then, here’s to the 22nd of February and the start of our racing year – bring it on!