We knew Aprilia were going to do something awesome with the epic RSV4, in terms of a track-only machine, but we honestly didn’t know just how special it would be…

What was once the preserve of race teams can now be bought by anyone, thanks to Aprilia, and it seems as though they’re catering for many wallet sizes at the same time, albeit still not at the cheap end of the scale! Then again, quality costs.

Prices are yet to be revealed, as are the schemes for adding or removing items to adjust the cost, but we do know there are five models to choose from. And, when it comes to a track only bike, we doubt you’ll find better on offer than any of these!

As Aprilia themselves put it – Aprilia Racing, the Racing Division that has earned the Noale-based manufacturer 54 World Titles, introduced a program today to make the same technology that was developed for the championship winning bike available to anyone who wishes to compete in factory derivative championships or who wants an RSV4 with racetrack optimised performance – meaning they’re there for you to go racing on, or racing your mates on, or just thrapping around a track on and if you’ve got the cash, you can have a track bike that genuinely makes over 210bhp at the rear wheel. Wow…

The five models are as follows: Then it gets really serious…

RSV4 R-FW W-SBK
Replica of the RSV4 Superbike used by the official Aprilia Racing Team in the SBK Wold Championship.
Both the bike and the level of assistance may be tailor made in accordance with the budget and ambitions of each rider and team.
It is the best that can be desired and allows one to have a star role in the Superbike world championship. 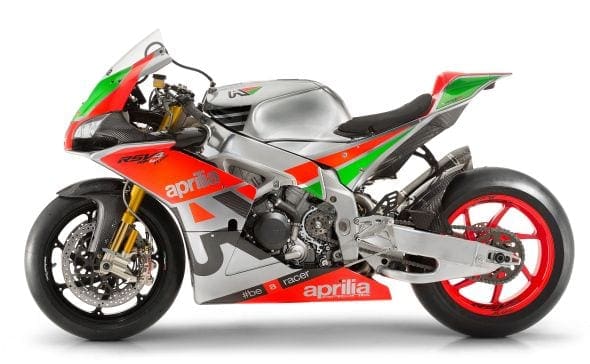 RSV4 R-FW ‘MISANO’
The bike presented at EICMA is a demonstration of the level of preparation possible through the ‘Factory Works’ program and is the entry level for the W-SBK line.
In true Aprilia Racing style each component has been optimised to offer the best in performance while maintaining elevated overall balance and reliability.
It is a bike that can do well at any competitive level, while remaining “within reach” of enthusiasts who desire an extraordinary bike to exercise their racing skills, knowing that nothing can come closer to the rush felt by SBK World Championship champions.
The colour scheme is a celebration of Aprilia’s first victory in a ‘road racing’ competition and underscores the exclusivity of the model

That is astonishing, although we believe the one most relevant to us normal folks is the first, the Stock1 MM Race. Unless you’re minted, in which case, go nuts! 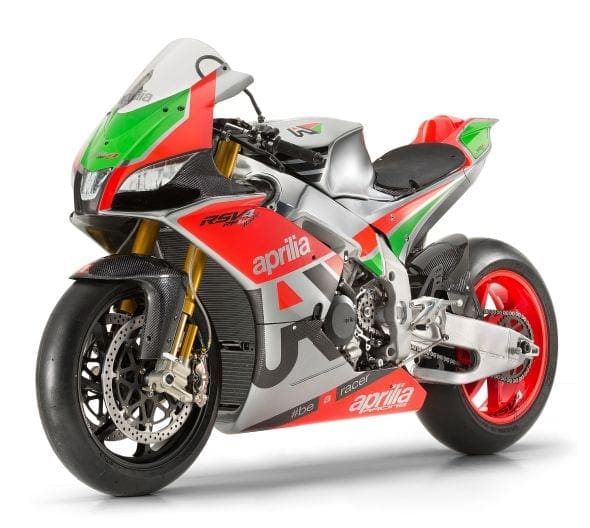 Aprilia’s racing boss also had some words to say about the new program:

Romano Albesiano – “The RSV4 racing versions we are presenting at EICMA are, first and foremost, a unique opportunity that Aprilia Racing is making available to those who want to own a real race bike. At the Aprilia Racing Division we worked to pack all the know-how behind the RSV4 into these exceptional bikes: know-how which has made the RSV4 one of the top winning bikes in the history of production-derived bikes. The SSTK Championship victory this year is an addition to 7 world titles we’ve won in the SBK. Now all the experience we have acquired through these victories is available to whoever wants to race with our bike: both those who want to participate in championships and those who want to ride a real Aprilia Racing bike on the racetrack. We’re making several levels of sophistication available. This is a racetrack optimised RSV4, from the SSTK version (in every way the bike that dominated the Superstock 1000 FIM Cup) all the way to the top, a full-fledged Superbike”.

So, the top spec’ version makes 230bhp at the crank. But as the stock RSV4 RF or RR makes 200bhp at the crank (184bhp rear-wheel on our dyno), you can expect the lower spec’ versions to still be pretty healthy, banging on the door of a genuine 200bhp at the rear wheel on the Superstock model. And that, ladies and germs, is more than enough for most of us bar actual racers. Prices are yet to be confirmed, but as soon as we get them, we’ll let you know.