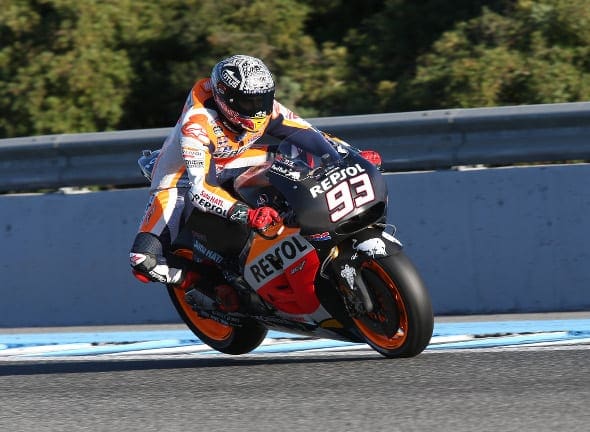 Some cracking images and pictures of the last MotoGP test of 2015, in preparation for 2016, by the man that is Kel Edge…

Before everyone went off on their Christmas holidays, some testing for the 2016 MotoGP season took place under the winter Spanish sun at Jerez. Teams were testing new electronics and of course, the new Michelin rubber.

Honda are said to be struggling a bit to get their aggressive engine to work properly with the new spec’ ECU and software for engine mapping, traction control, and so on. Marc Marquez did have a couple of little spills but otherwise got a lot of work done which they will carry on at Sepang in the new year.

Aprilia were there, but on the old bike using the old electronics, testing mostly tyres. Their 2016 bike is yet to actually exist, but we’ll expect it to be rolled out in Malaysia sometime in later January.

Ducati joined en masse, with factory and private teams ripping it up, especially Scott Redding who seems to be very much enjoying his new Desmosedici – c’mon Scotty for next year!

WSB teams and pilots were also present, giving the MotoGP stars a bit of a fright at times, in fact Jonny Rea found a couple of them were in his way a lot of the time! We’ll post another story with WSB testing images soon.