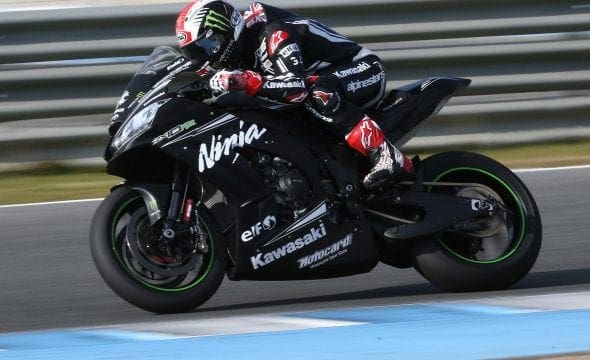 Finally, after a long (and very cold) winter, the racing season looms over us; even if we might not be able to see most of the bloody stuff (click here for the doomsday story). So what did we learn from the two day test at Jerez?

Jonathan Rea is still THE force to be reckoned with:

Even after wrecking his number one ZX-10R, the reigning champ managed to bounce back on his number two bike to grab the bragging rights from Milwaukee Aprillias Lorenzo Savadori, and edge out his teammate by just over four tenths. Could this be an early warning sign of another dominant year?

Marco Melandri really is back:

After the past few years Melandri’s had, it’s fair to say a lot of people would bet against him. Yet for his first proper ride since a hefty knee operation in November, the Italian has come out swinging; finishing above his Aruba.it Racing Ducati teammate Chaz Davies is no mean feat (even if Marco did use a qualifier, while Chaz didn’t…), who we know is bloody marvellous on that Panigale R. Rule #1 of racing? Always beat your teammate!

Okay, it may look like an average showing on paper with Nicky Hayden over half a second from the top (even with a qualifier) and Bradl an extra four tenths back from that, but this is the first proper test of a brand new bike which will be nowhere near ready. That thing will be rapid.

The Yamaha duo still have their work cut out:

Although both Lowes and van der Mark ended up in the top ten, it still isn’t a reflection of their ability as they are both struggling to get close to the top. With the fastest of the duo, Lowes, ending up over eight tenths from Rea, you have to hope they’ll get those R1s sorted – and soon!

Those Milwaukee Aprillias put SMR back on the map:

After a tough year with BMW, the Milwaukee Aprillia squad seemed to have found a new lease of life in  the legendary Italian marquee. Okay, Laverty had a pretty big off, but we know he’s going to be rapid and Savadori was absolutely on the pipe; qualifier or not he still showed up big style. Could be some clever bets for race wins in this camp!