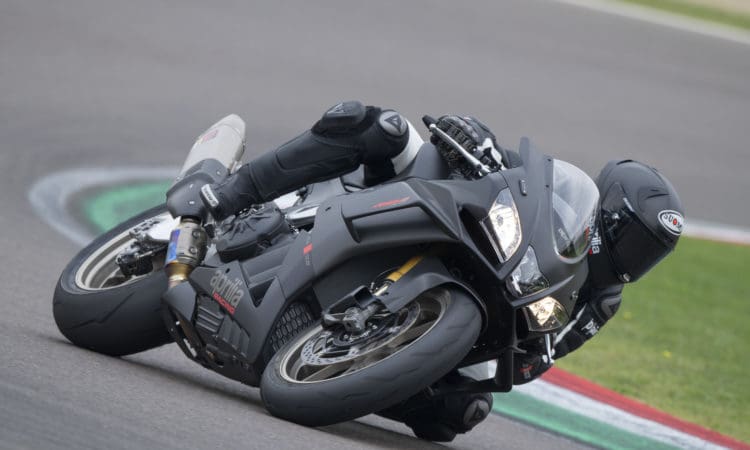 WHILE we were quite rightly amazed by the Ducati Panigale V4S launched earlier this year, we did quibble a bit at the capacity increase. In a litre bike test, the V4 had a load more power, partly because it has a 1,103cc motor. How long before someone else joined them?

Less than a year in fact. Aprilia has jumped in with both feet, and fitted its RSV4 Factory with a 1078cc version of its 65-degree V-four engine. It’s not much of a surprise really – the Noale outfit had already built an 1100 V4 for its Tuono hyper-naked, so throwing the big lump into the RSV4 is a proper no-brainer.

They’ve made a good job of it – on paper at least. That engine pumps out a beefy 217bhp@13,200rpm, which is 3bhp more than the figures claimed for the Ducati V4. The bore has gone up by 3mm to 81mm from the previous 78mm. 81mm is the maximum bore for a MotoGP bike, and also the bore size on the Panigale V4. Stroke is 52.3mm, and there are some gearing mods, but the rest of the engine is fairly similar to the 1000 lump.

The RSV4 1100 Factory also gets a chassis revamp. The obvious stuff is the new Brembo Stylema brake calipers up front – Ducati had these to themselves for a year on the Panigale V4, but everyone can have them now. Ohlins forks and shock are present and correct, and the steering geometry has been tweaked, reducing wheelbase slightly. The swingarm is stiffer, and you still have all the frame adjustment options – steering and swingarm pivots, plus engine mount locations. Kerb weight is an impressive 199kg, just 1kg more than the Panigale

The bodywork includes a set of MotoGP-style aerodynamic wings either side, which are supposed to improve high-speed handling. Aerodynamics only become important over about 60mph, but using air flow to keep the front end down under acceleration, as Aprilia promises, is the obvious benefit, but the firm says the wings also improve stability during braking, and at high speeds. Smart.

Aprilia’s been right at the forefront of electronic rider aids development, so the RSV4 1100 Factory gets a full suite of all the good stuff. From cruise control, pitlane speed limiter and up/down quickshifter, to cornering ABS, wheelie, traction and launch control, the RSV4 has it all, controlled by a huge colour dashboard and super-convenient switchgear. All it’s missing is the electronic suspension used by Ducati on the Panigale V4S – but it’ll also avoid the price penalty of fitting that system.

No word on UK price or availability as yet – but we’ll let you know as soon as we can. And we’ll be riding the RSV4 1100 asap too…