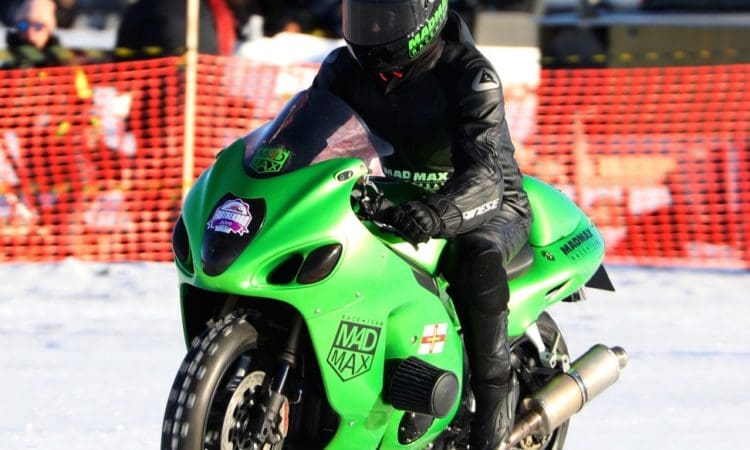 Trying to do 200mph on ice is harder than it looks – who knew?

WE’VE ALL done crazy things here, haven’t we? But this one sort of takes the biscuit. We mentioned the other week that Guernsey-based land speed racer Zef Eisenberg was going to Sweden to try and hit the double-ton on his titanium-spike-tyred supercharged Hayabusa. And we’ve just found out how he got on.

“On its first run, the bumps and tyre flex from the ice, caused metal fatigue, ripping apart the stainless steel inner carcass puncturing both the front and rear tyres,” his MadMax team told us. “But he nailed the throttle anyway, and managed 160mph on two flats…”

We’d be buying a very expensive Swedish pint at this point, and heading for home. But not the Zef man. He had another go, and this time, another front puncture caused a 113mph tankslapper. On ice. No thanks…

He had two more goes, and each time, the front tyre failed, first cutting the front brake hoses (!), then, on his final run, the tyre broke up, holing the bike’s radiator, and finally calling a halt. He’d managed 176mph on that last run – making him the second fastest rider on the day.

With no spare rad, and a dawning realisation that stronger tyres will be needed to deal with the spikes at these speeds, a Swedish beer was finally purchased. And he’s already booked his spot for the return leg next year.

“It’s been the craziest, maddest race event that I have ever participated in,” Eisenberg told us. “Racing on ice is not easy or for the fainthearted. If record breaking was easy, everyone would be doing it! Next year Team MADMAX has already committed to return with far more knowledge, bulletproof tyres and radiator, so that we can hit the big 300 kph speeds, and beyond…”