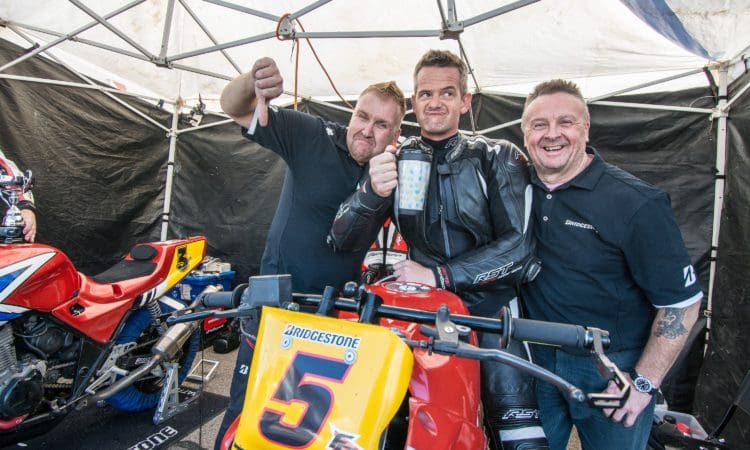 There are two very different sides to the team Bridgestone / Fast Bikes awning in terms of our CB500 race preparation. We are now three weeks away from Round 1 of EMRA at Mallory and Gary is tested, up to speed, focussed and chomping at the bit as he has already documented here.

I too share his enthusiasm, but this is tainted with the stark realisation that I have not tested my bike yet. Like Gary’s it has been stripped powder coated and rebuilt, yet unlike Gary’s it hasn’t had a proper shakedown yet.

This will come on the 31st March, finally booking myself a track-day with No Limits one week before the racing commences so it is all down to the wire; especially if I get too excited and bin it. That would really suck.

This is an additional pressure I could do without to be honest, (as is letting my Ma down on Mothers Day) but it can’t be helped. This bike needs at least a few practice laps prior to race day which goes straight into the qualifiers in the one day racing format.

But at least the bike is ready to enter the track and I am really happy with it to this point, it’s a different looking machine via extensive work organised by Benny Grayson of BGR Motorsport, the chap who had Gary’s machine in the shop prior to mine.

The engine has had an overhaul, Benny stating that it was in good order too – thus a special thanks to Josh Leaning who I bought the bike off blind last year – having won the Thundersport CB500 Championship last year Josh knows his onions with these bikes and it would appear that he sold me a bloody good one.

From Benny I went to Scorpion Exhausts who fitted a new titanium factory oval silencer to the link pipe I nicked off of Gary’s bike as he put on a new system, now it is side slung to the left as opposed to the right which makes more sense for the right-centric Mallory and potential to slide off as I did last year.

Speaking of which, new bolt-on engine case covers came from Sheps replacing the stuck on ones I had before, alongside a new mudguard in white to keep with the new colour scheme of Red, White and Blue.

Other bits have been replaced, I had bent my bars on hitting the tarmac so B&C Express sent through a Renthal flat bar and grips, new Armstrong Brake discs and Biketek levers from Bike It and a whole load of Motul for Gary and I to share from Motodirect.

Motodirect have even badged my suit for this season, though I am trying to keep the Fast Bikes on the down-low to avoid any over-hyped expectation on my personal ability and performance. I figure those logos will be nicely hidden under an Orange Jacket for the racing at least.

And of course a nice new set of Bridgestone R11s which will probably see me through three rounds.

This all reads as if I have personally done nothing to my own race bike, which I have. Fresh from having some awesome new number boards put on the tail section arranged by Phoenix Motorcycles in Trowbridge I put on some stickers – I have excelled at that at least.

So a sparkling new-ish bike, branded leathers and a blog to support my season, its all coming into place – what I need to avoid is all this proving to be all fart and no shit with poor results.

So to Mallory for my test day, then racing the following week with a re-uniting of the team that helped Gary and I so much last season, Chris, Lezzo and even BGR Benny said he may pop his head in if not racing.

I have a lot to do if I am going to keep my team mate Gary in my racing view, he has shared his lap-times with me and continues to improve – he hasn’t shared them on his blog so I won’t divulge them on mine but he has found his pre-season mojo that’s for sure.

I’ve just got to hope I can do the same, improve my times as I am currently a full five seconds behind Gaz, sharpen my race-craft and grow the sort of balls that will keep me in sight of the leaders, or even amongst them – pah!

I just hope I haven’t left it too late!