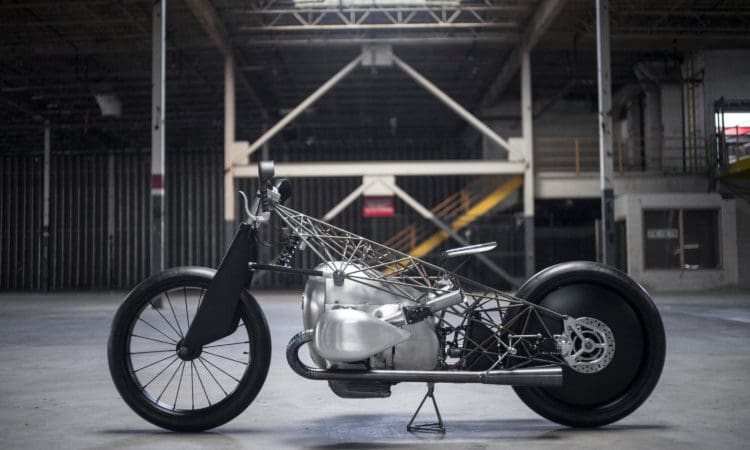 We spoke about this at xmas time – when BMW first showed off its new 1800cc flat-twin Boxer engine in a Japanese custom machine. And here’s another chance to see the big new lump, which was shown at the Handbuilt custom bike show in Austin, Texas last week. Built by US firm Revival Cycles, it’s quite a sight, though we’re not sure how practical it would be. Dubbed the ‘Revival Birdcage’, it uses a radical fabrication technique for the chassis – small-diameter titanium rods, hand-welded into a massively triangulated, super-stiff space frame. It’s a work of art rather than a piece of practical engineering of course – we can only imagine the hours that went into all those fiddly TiG welds.

Away from the frankly insane frame, we get another look at the new 1800cc engine which BMW’s been trickling info out about. It’s aimed at the cruiser market it seems – so there are pushrods rather than some OHC setup, and that, plus the large capacity, points to a low-revving, torque-heavy beastie. BMW doesn’t drag its feet in performance terms though, so don’t expect something dull and Harley-like. As we said last time, we’re hoping for something light in mass, beefy in grunt, yet still fairly powerful. The chance of a factory Kompressor option would obviously be the cherry on the big-bore cake…

We’ve got a while to go before the official unveil of the factory custom, so don’t be surprised to see more of this sort of thing in the next few months. In the meantime, check the gallery of pics below and see the levels of detail that have gone into the Birdcage.